Navy SEAL Foundation’s 2020 Evening of Tribute Raises over $3.2 million in support of SEALs and their families 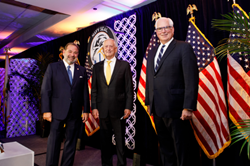 I am grateful to everyone who stepped up to participate and participate in the event. No matter what is happening in our daily lives, the SEAL community still undertakes their missions, and they still need our support. -Bob Loquercio, Event Chair

Last week, the Navy SEAL Foundation hosted its 9th Annual Midwest Evening of Tribute. Donors from more than 26 states and Puerto Rico showed their support for the benevolent organization and contributed over $3.2 million to sustain its programs. The live-streamed event, which has always been a cornerstone of the organization’s fundraising efforts, was held in Chicago and included a limited number of on-site attendees following state and local ordinances. The event’s virtual audience was tuned in from across the globe and included active-duty Naval Special Warfare (NSW) community members and NSW Gold Star and Surviving Family members.

The Foundation’s Evening of Tribute recognized the courage, commitment, and sacrifice of the Naval Special Warfare (NSW) community. The event was chaired by Veronica and Bob Loquercio, who have been staunch supporters of the Foundation for many years. Mr. Loquercio, a community leader and business owner, shared, “Given how COVID has forced the Foundation to move all of their events to 2021, it was important to host an event to ensure the ongoing support of those who never have an easy day. I am grateful to everyone who stepped up to participate and participate in the event. No matter what is happening in our daily lives, the SEAL community still undertakes their missions, and they still need our support.”

Robin King, CEO of the Navy SEAL Foundation, shared stories of NSF’s impact over the past 20 years and thanked donors and fundraisers for their unwavering support. She then presented Miles D. White, Executive Chairman of the Board, Abbott Labs, with the prestigious Navy SEAL Foundation Patriot Award. This award recognizes individuals and organizations that contribute significantly to the nation’s betterment and embody the SEAL community’s values. Mr. White and his team at Abbott have worked tirelessly to help American citizens, especially in this time of COVID-19.

Bob Loquercio welcomed General James Mattis, USMC, (Ret.) to the stage. General Mattis delivered the evening’s keynote address and spoke about unity and the qualities that make America the nation among nations. “America's essential character is demonstrated and will always shine through in innumerable ways across our country every day, just as it is here tonight. From SEALs on the outpost line living up to the Navy values of honor, courage and commitment; to those who live here in Chicago whose devotion to this city could never be diminished; to the Navy SEAL Foundation's unwavering commitment to the SEALs and their families; to role models recognized by the Patriot Award...these are the examples that define America."

U.S. Navy SEALs have been in sustained combat for nearly two decades, performing hazardous work in unforgiving environments at an unrelenting pace. NSW operators are currently deployed in over 30+ countries worldwide and can spend up to 270 days each year in harm's way.

The Navy SEAL Foundation stands behind these warriors and their families by providing a comprehensive set of programs specifically designed to improve health and welfare, build and enhance resiliency, empower and educate families and provide critical support during illness, injury or loss.

Like the community it serves, the Navy SEAL Foundation is a high performing organization committed to excellence. NSF has been awarded the coveted 4-Star rating from Charity Navigator since 2011 and has earned a perfect score of "100" each year since 2016 for financial health, accountability, and transparency, placing NSF in the top 1% of rated charities. Ninety-four cents of every dollar donated goes directly to programs or is retained for future mission use.

The Navy SEAL Foundation is a 501c3 national non-profit charitable organization. TAX-ID 31-1728910. NSF is a non-federal entity, and it is not a part of the Department of Defense or any of its components, and it has no governmental status.