Nazeeh Z. Abdul-Hakeem launches marketing campaign for ‘The Athaan in the Bull City’ 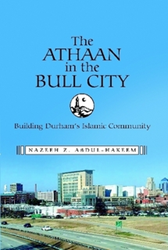 Islam in America is becoming increasingly more common. In his new book, “The Athaan in the Bull City: Building Durham’s Islamic Community,” (published by Lulu) Nazeeh Abdul-Hakeem describes how black American Muslims influenced the spread of Islam in Durham, North Carolina. Abdul-Hakeem is launching a marketing campaign to expand the book’s reach.

Abdul-Hakeem himself has played a role in expanding the Islamic community in Durham by helping to found Jamaat Ibad Ar-Rahman, Inc., the city’s largest Muslim organization.

“The Athaan in the Bull City” illustrates the history of Islam’s roots in Durham, going back more than 30 years. The book also gives insight to the international perspective immigrant Muslims have provided through the years.

“The Athaan in the Bull City” aims to open readers up to the diversity found in the American religious experience and better acquaint them with a religion they hear of frequently, but may know little about.

About the Author
Nazeeh Abdul-Hakeem, a retired city planner for Durham, North Carolina, became a Muslim in 1979. He made several major and minor pilgrimages to Makkah and Madinah in the Kingdom of Saudi Arabia and visited Masjid Al-Aqsa in Jerusalem. He and Olaiya, his wife, have been married since 1982.