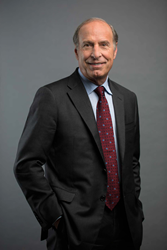 Dr. Hochman is a bold leader, who has used his intellect and curiosity to improve and innovate healthcare, and to take it one step further by using healthcare to improve the community.

The National Center for Healthcare Leadership (NCHL), a not-for-profit that supports the advancement of evidence-based leadership practices, is pleased to announce that Dr. Rod Hochman, president and chief executive officer of Providence St. Joseph Health, has been named the 2019 Gail L. Warden Leadership Excellence Award recipient.

Dr. Hochman is recognized for creating an organization with a strategic focus of population health, whole person care, mental health, and genomics medicine, while remaining committed to its mission to serve all, especially the poor and vulnerable, through its core values of compassion, dignity, justice, excellence, and integrity. Under his leadership, Providence St. Joseph Health, based in Renton, WA, has grown from a $12 billion organization to the nation’s third largest health system with annual revenues of $24 billion, 119,000 caregivers, 51 hospitals, and 829 clinics that stretch across seven states. By hiring key executives from companies like Amazon and Microsoft, Dr. Hochman is leading the charge to bring healthcare into the digital age and to use technology to enable better, more convenient and more affordable services to achieve value-based care.

"Dr. Hochman is a bold leader, who has used his intellect and curiosity to improve and innovate healthcare, and to take it one step further by using healthcare to improve the community,” NCHL President and Board Chair Tim Rice said. “His influence on healthcare can be seen through his board leaderships, such as the American Hospital Association and the Catholic Health Association, as well as developing and nurturing Providence St. Joseph’s caregiving team. He is a leader who believes in his people and then empowers them to do their best work, creating an environment that fosters accountability and excellence. As an outspoken advocate on critical social issues and leading change in healthcare’s future, Dr. Hochman is improving the field with significant and lasting contributions.

Dr. Hochman joined Providence Health & Services as group president in 2012, becoming its leader in 2013. In 2016, Providence joined with St. Joseph Health to form Providence St. Joseph Health. Dr. Hochman was also president and chief executive officer of Swedish Health Services in Seattle from 2007 to 2012, when it joined Providence Health & Services. From 1998 to 2007, he was at Sentara Healthcare in Norfolk, VA, where he rose to the position of executive vice president. Earlier in his career he worked at Health Alliance of Greater Cincinnati from 1993 to 1998, and Guthrie Healthcare System in Sayre, PA from 1984 to 1993.

Over the span of his career, Dr. Hochman has held numerous major national leadership positions including Chair, Regional Policy Board No. 9, America Hospital Association from 2016 to the present, Board Member, American Hospital Association 2016 to the present, and Chair, Catholic Health Association, 2017-2018. He has also received numerous honors including being named one of 12 “disrupters” in healthcare in 2018 by Modern Healthcare, placing second (tie) on Modern Healthcare’s 2018 list of the 100 most influential people in healthcare, honored as the 2017 Partners in Care Vision and Excellence In Healthcare Leadership, and named Innovator of the Year in 2015 by Press Ganey.

Dr. Hochman will be honored on Tuesday, November 19, 2019, at the Leadership Award dinner, which attracts healthcare’s luminaries and notable leaders from prominent health sector, academic, and research organizations. The leadership event will be held in conjunction with NCHL’s annual Human Capital Investment Conference, which this year has the theme of Healthcare. Powered by People. Our theme highlights the importance of creativity, innovation, diversity, and inclusiveness to our collective success. Improving the health of our communities depends on the use of technology, data and analytics. But it is driven by our people and our shared goal to build leaders who can power our work now and into the future.

ABOUT THE GAIL L. WARDEN LEADERSHIP EXCELLENCE AWARD
Established in 2005, NCHL’s annual Gail L. Warden Leadership Excellence Award recognizes individuals who have made significant contributions to the health field, including the mentoring of future leaders towards transforming organizational performance to improve health and healthcare. It is named for Gail L. Warden, founding chairman of the NCHL Board, president emeritus of Henry Ford Health System, and a major proponent of leadership development throughout his career.

ABOUT THE NATIONAL CENTER FOR HEALTHCARE LEADERSHIP
E stablished in 2001, the not-for-profit National Center for Healthcare Leadership (NCHL) champions three premier membership programs that advance healthcare leadership. These are the Leadership Excellence Networks (LENS), US Cooperative of International Patient Programs (USCIPP), and National Council on Administrative Fellowships (NCAF). Each of these programs supports a portfolio of interorganizational collaborations that address critical issues facing today’s leaders as they pursue excellence and solutions. For more information please visit NCHL’s website. You can also visit NCHL's LinkedIn page or follow NCHL on Twitter.