Peter Butler, whose healthcare career spans 40 years, is being recognized for his contributions to the success of NCHL, including serving as its Board Chair where he oversaw growth in its program portfolio, and the launch of its National Council on Administrative Fellowships. 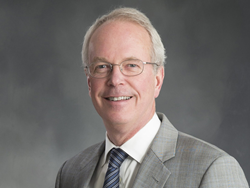 Peter's vision and commitment to our work has enabled NCHL to benefit from the full breadth of his exceptional skills and background in healthcare operations, policy, and education.

The Board of the National Center for Healthcare Leadership (NCHL), a not-for-profit that works to improve health by enhancing the capacity of healthcare leaders, has named Peter W. Butler the recipient of its Distinguished Service Award.

Mr. Butler is being recognized for his outstanding contributions to NCHL’s success including as an original member of its Advisory Council which produced the landmark Health Leadership Competency Model in 2004. He also served as NCHL Board Chair from 2011 to 2014, where he oversaw the growth of its program portfolio, including the U.S. Cooperative for International Patient Programs and the Commonwealth Center for Governance Studies. Additionally, Mr. Butler was instrumental in supporting the launch of the National Council on Administrative Fellowships, a collaborative network of leading health systems and graduate health management programs focused on formally recognizing and advancing the role, availability, and quality of administrative fellowships as pathways for high-potential early careerists into positions of progressively greater leadership responsibility.

“Peter’s vision and commitment to our work has enabled NCHL to benefit from the full breadth of his exceptional skills and background in healthcare operations, policy, and education,” NCHL President and Board Chair R. Timothy Rice said. “He served as Board Chair during a particularly critical period in our history, and successfully set the organization on a path toward broader and deeper impact.”

In 2016 Mr. Butler retired as president from Rush University Medical Center (RUMC), which he joined in 2004 as executive vice president and chief operating officer. He continues in his role as professor and chair of Rush University’s Department of Health Systems Management, leading its nationally recognized master’s program and teaching its flagship health policy course. Previously, he served as president and CEO of The Methodist Health Care System (now Houston Methodist). He was also senior vice president and chief administrative office at Henry Ford Health System. Earlier in his career he held various positions at Rush-Presbyterian-St. Luke’s Medical Center (the predecessor to RUMC) and the Association of American Medical Colleges in Washington DC. Mr. Butler earned his Master of Health Services Administration from the University of Michigan School of Public Health and his Bachelor of Arts in psychology from Amherst College.

During his career, Mr. Butler has served on many healthcare professional boards and committees, including as a member of the AAMC Council of Teachers Hospitals Administrative Board, the University of Michigan School of Public Health’s Griffith Leadership Center Advisory Board, Medicare Payment Advisory Commission (MedPAC), the Health Research and Educational Trust Board and the University HealthSystem Consortium (UHC) Governing Board, where he was also the Chairman.

He has also been the recipient of numerous honors and awards including a Lifetime Achievement Award from the American College of Health Care Executives/Chicago Health Executives Forum (2017), an Honorary Degree of Doctor of Humane Letters from Rush University (2016), and the Gary L. Filerman Prize for Educational Leadership from the Association of University Programs in Health Administration (2016).

The Distinguished Service Award will be presented to Mr. Butler at NCHL’s annual Leadership Award Event on November 13, which is held in conjunction with its Human Capital Investment Conference. Information about registering for the conference and recognizing Mr. Butler’s work is available on the NCHL website.

ABOUT THE NATIONAL CENTER FOR HEALTHCARE LEADERSHIP
Established in 2001, the not-for-profit National Center for Healthcare Leadership (NCHL) serves as a catalyst to ensure the availability of accountable and transformational leadership for our 21st century healthcare needs. Through its support of interorganizational learning collaboratives, NCHL pursues a vision to improve population health through leadership and organizational excellence. For more information please visit NCHL’s website, the NCHL LinkedIn page, or follow NCHL on Twitter.