ArborSystems announced the donation of ArborSystems Boxer Insecticide to protect up to 200 Ash trees from Emerald Ash Borer at the Eugene T. Mahoney State Park. 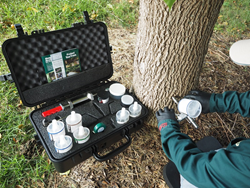 ArborSystems announced today the donation of ArborSystems Boxer Insecticide to protect up to 200 Ash trees at the Eugene T. Mahoney State Park.

“I am a camper that has used the Mahoney campgrounds several times and has the ability to donate the chemistry that can save these Ash trees,” said Chip Doolittle, President of ArborSystems in Omaha, Neb. “Boxer Insecticide, containing 4 percent active ingredient of Emamectin Benzoate, provides two-year control of Emerald Ash Borer and other insect and mite pests.”

The Nebraska Game and Parks Commission will begin treating Ash trees at Eugene T. Mahoney State Park this month to minimize potential damage of EAB. The Eugene T. Mahoney State Park is located midway between Lincoln and Omaha in Nebraska. EAB was detected at Lakeside Campground in June 2018, with no further sightings at Mahoney or other state parks since then. To slow potential spread of the pest, commission staff will begin treating trees with the approved pesticide. It has been proven to be effective at protecting and saving trees, and is injected directly into the tree, keeping it safely away from park visitors.

“It is great to acknowledge the ownership that ArborSystems, Inc. is showing in the preservation of park and natural resources that in fact belong to the citizens,” said Jim Swenson, parks division administrator. “These partnerships are critical to our park management efforts.” ArborSystems is donating Boxer Insecticide to treat up to 200 trees this year and again in two years, if needed.

ArborSystems chemicals are used with their Wedgle Direct-Inject Tree Injection System as an injection into the flare or base of the tree to ensure even distribution through the tree’s vascular system. Chemicals are delivered fast and effectively at a known dose rate. Also, there is no mixing in the field, waiting for uptake of chemicals, guarding during draining process or need for power, pumps or return trips by applicators. The Wedgle is the only tree trunk injection application method that does not require a drilled hole.

“I am pleased to be joining the commission as a trusted partner and native Nebraskan in this effort to save Ash trees,” said Doolittle. His great-great-grandparents came to Nebraska from Vermont around 1885 and settled in the Pawnee area. Doolittle grew up in Cheney.

ArborSystems provides a variety of tree injection systems and insecticides, fungicides, antibiotics, micronutrients and tree growth regulator designed to meet a broad range of tree care needs. They also supply Emamectin Benzoate in a one-quart bottle for different drill and tap methods, macro-infusion systems and higher volume tree injection devices used by other arborists, urban foresters and tree care professionals. They are known for the Wedgle Direct-Inject Tree Injection System that injects chemicals without drilling trees and are recognized for saving thousands of Ash trees from Emerald Ash Borer (EAB) since 2002 as documented by Michigan State University. All of the Wedgle’s hardware components are made in the United States. For more information, visit http://www.ArborSystems.com.