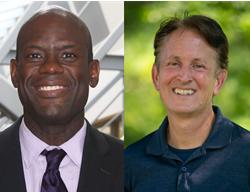 In this month’s episode of the NEPC Talks Education podcast, NEPC Researcher Christopher Saldaña interviews Drs. Bruce Baker and Preston Green, leading experts in K-12 school finance and school choice policy. Baker is a professor in the Department of Educational Theory, Policy, and Administration at Rutgers University. Green is the John and Maria Neag Professor of Urban Education at the Neag School of Education at the University of Connecticut.

Saldaña, Baker, and Green discuss the Biden administration’s proposal to allocate $130 billion in support to K-12 schools. While Baker and Green are encouraged by the administration’s decision to provide additional funds to schools and target those funds to schools serving students in poverty, they are concerned that the funds are temporary and being considered for uses that may not provide much benefit to students, such as measuring “learning loss.” They explain that one of the mistakes made in the aftermath of the 2008 Great Recession was offering short-term federal funds that expired before state economies had recovered, creating a fiscal cliff for school funding. A better approach to school relief, they argue, would anticipate a slow recovery and incentivize states to return per-pupil funding to pre-crisis levels. Further, they advocate for funds to be spent on facility improvements and health supplies that will ensure students and teachers are safe during the pandemic.

Baker and Green also raise concerns over the US Supreme Court’s recent decision in the Espinoza v. Montana case. They explain that while the Biden administration’s relief proposal provides additional federal funds for schools, the Court’s decision in Espinoza threatens to divert funding from public schools to religiously affiliated private schools through tax-credit scholarship programs. Baker and Green explain that the Court’s decision is one in a long line eroding the separation of church and state in educational policy. They fear that future decisions will further erode what little is left of this separation.

Baker and Green conclude this month’s episode by describing their recent work developing a reparations framework for considering school finance. They explain that their framework would address the Black-White gap in funding for schools. They argue that implementing such a program would be a significant step towards providing racial justice for Black students.

A new NEPC Talks Education podcast episode, hosted by Christopher Saldaña, will be released each month from September through May.

Don’t worry if you miss a month. All episodes are archived on the NEPC website and can be found here.