Slazzer removes image backgrounds in 5 seconds without a single click of a button. 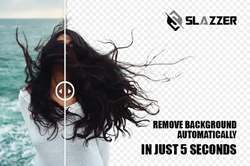 Netflairs Technology has released its first Visual AI product named Slazzer to all individuals and businesses in the world. The technology that drives Slazzer is Artificial Intelligence (AI) and was developed by Mr. Deep Sircar through years of development in his lab. Just as people can differentiate between the background and foreground of a picture, Slazzer's AI technology can differentiate between the foreground and the background using complex internal computations. This simply means that AI is able to determine which part of the image should be retained and which should be discarded. Once the background is identified, it is completely removed from the foreground instantly in a blink of an eye.

Features and benefits of Slazzer:

The software is now live and ready to be used at https://slazzer.com/

Netflairs Technology is a leader in quality software development that exceeds customer expectations. Based in Canada and India, the company strives to be the worldwide leader in the advancement of Visual AI.