The second volume in George Robert Minkoff’s “In the Land of Whispers” trilogy is narrated by Nigel Gore. 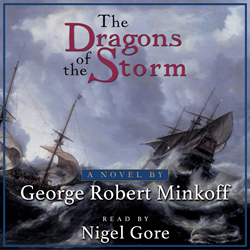 The Dragons of the Storm. A novel by, George Robert Minkoff, read by Nigel Gore

Gore’s narration brings an immediacy and beauty to the text very similar to the experience of watching a play, infusing the narrative with a heightened reality of a motion picture.

When Powhatan forcibly adopted Captain John Smith into his tribe, he declared that after three wounds the river would speak to him. While fishing in the Chesapeake toward the end of a long expedition, Smith is stabbed by a stingray and falls deathly ill. Because he is set to assume presidency of Jamestown on their return, the fate of the colony may depend upon his recovery. The old alchemist and mariner, Jonas Profit, doctors this second wound, and to ease Smith’s suffering starts to tell of the daring circumnavigation of the world by Francis Drake. So begins the second volume of George Robert Minkoff’s visionary epic, "In the Land of Whispers," revealing the desperate events in the lives of both Drake and Smith that will lead finally to a permanent settlement for the Elizabethans in the New World. George Robert Minkoff’s classic, “The Dragons of the Storm” is brought to life by the narration of Nigel Gore. Now available as an audiobook for the first time, Gore portrays a riveting novel to listeners ready to embark on an adventure.

“The Dragons of the Storm is as enthralling as The Weight of Smoke. I think John Smith and Francis Drake would rejoice in George Minkoff’s lively re-creation of them,” said Edmund Sears Morgan, historian, of the print edition.

John Smith is followed from the initiation of the volume into a year of unforeseen trials and their consequences. While the London Company’s aristocrats broker the colony’s fate with their wealth and power, Jamestown colonists struggle an ocean away merely to survive in an unforgiving land. The one man who might save the colony from itself, John Smith, will have to confront not only his enemies, and the legacies of his spiritual fathers, but also the mysteries of his destiny.

In celebration of the 400th anniversary of the founding of Jamestown, "The Dragons of the Storm" has been issued as an audiobook, narrated by Shakespearean actor Nigel Gore. Minkoff says, “Gore’s narration brings an immediacy and beauty to the text very similar to the experience of watching a play, infusing the narrative with a heightened reality of a motion picture. The trials of Drake and Smith are seen in a context of mutinies, explorations, and confrontations with worlds neither has experienced. Drake, returning from his circumnavigation of the world, becomes one of the richest men in England, one of a few commoners ever to attain nobility. Smith never rises to the English court. His battles with the Indians and the colonists are never fully revealed in England, while Drake’s epic battle with the Armada was mostly seen from the English coast. Gore speaks this drama as if it were truly before his eyes.”

“The Dragons of the Storm” can be purchased online here. For information regarding George Robert Minkoff, visit https://www.minkoffaudio.com. For press or audiobook review inquiries, contact Olga Gonzalez at info(at)pietrapr.com, or call 212-913-9761.

About George Robert Minkoff
A rare book dealer for fifty-two years, George Robert Minkoff is a member of the Antiquarian Booksellers’ Association of America, and the International League of Antiquarian Booksellers. Minkoff serves on the Board of Directors of the Poetry Society of America, currently serving as Secretary. George Robert Minkoff Inc. Rare Books is known internationally for the selling of manuscripts and letters of major American and English writers. Minkoff has written the "Bibliography of the Black Sun Press" and the "Bibliography of the Black Manikin Press," both standard references in the field. Additionally, George Robert Minkoff has authored the trilogy "In the Land of Whispers," a historical novel concerning the English in the New World. The three volumes are: "The Weight of Smoke," "The Dragons of the Storm," and "The Leaves of Fate."