The Deep End, the 15th installment of the Diary of a Wimpy Kid series from #1 international bestselling author Jeff Kinney, is coming to listeners October 27 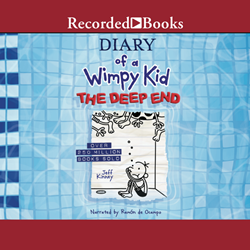 2020 has been challenging for kids. I wrote The Deep End in hopes of giving kids a much-needed laugh, and a much-needed break from their screens!—Jeff Kinney

A global phenomenon, Wimpy Kid has sold over 250 million copies worldwide in 78 editions and 65 languages—with new animated films coming soon from Disney+. The mega-bestselling series has also been a consistent fixture on the New York Times bestseller list for over 700 weeks, as well as a #1 bestseller on the New York Times, USA Today, Wall Street Journal, Publisher’s Weekly, and IndieBound lists.

Jeff Kinney said, “2020 has been challenging for kids. I wrote The Deep End in hopes of giving kids a much-needed laugh, and a much-needed break from their screens! I’m hoping we’re approaching a turning point with this pandemic, and that better times are ahead. But for now, the best thing a kid can do is to get lost in the pages of a book.”

In Diary of a Wimpy Kid: The Deep End, Greg Heffley and his family hit the road for a cross-country camping trip, ready for the adventure of a lifetime. But things take an unexpected turn, and they find themselves stranded at an RV park that’s not exactly a summertime paradise. When the skies open up and the water starts to rise, the Heffleys wonder if they can save their vacation—or if they’re already in too deep.

“This has been a year like no other, and Jeff Kinney understands that—in times like these—kids need a little fun,” said Andrea Wollitz, Director of Children’s Publishing for RBmedia. “In this latest Diary of a Wimpy Kid adventure, Greg and his family show us how to find joy and humor even when everything seems to be going wrong. We’re thrilled to bring this new audiobook experience to listeners of all ages.”

Diary of a Wimpy Kid: The Deep End, narrated by Ramón de Ocampo, is available for preorder now. The Recorded Books audiobook will be released in North America October 27, 2020, for digital download on Audible, iTunes, Google Play, Audiobooks.com, and wherever digital audiobooks are sold. It will also be available on CD from various retailers. The Deep End is releasing on the heels of an all-new fantasy about Greg Heffley’s best friend in Rowley Jefferson’s Awesome Friendly Adventure, the follow-up to the #1 bestseller Diary of an Awesome Friendly Kid: Rowley Jefferson’s Journal.

Jeff Kinney is the #1 USA Today, New York Times, and Wall Street Journal bestselling author of the Diary of Wimpy Kid series and a six-time Nickelodeon Kids’ Choice Award winner for Favorite Book. Wrecking Ball, book 14, was published in November 2019, and was an instant #1 global bestseller. Rowley Jefferson’s Awesome Friendly Adventure was published in August 2020, was an instant #1 New York Times bestseller, and has remained on the New York Times bestseller list since publication. Jeff has been named one of Time magazine’s 100 Most Influential People in the World. He is also the creator of Poptropica, which was named one of Time’s 50 Best Websites. He spent his childhood in the Washington, D.C., area and moved to New England in 1995. Jeff lives with his wife and two sons in Massachusetts, where they own a bookstore, An Unlikely Story.