G. M. Davis pulls no punches in ‘My War in the Jungle’ 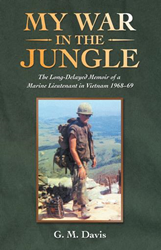 It’s past time for Americans to understand what that conflict was like, and how it has affected an entire generation of American men.

G. M. Davis tracks his tour of duty in the Vietnam jungle, leading Marines against the North Vietnamese Army, a well-trained and well-supplied professional army in his new autobiography, “My War in the Jungle: The Long-Delayed Memoir of a Marine Lieutenant in Vietnam 1968–69” (published by Archway Publishing).

A Marine rifle platoon commander in Vietnam, Davis shares the realities of the experience for himself, his radioman, his NCOs and his Marines. Davis details what it was like to fight a professional army and explains that it was nothing like what people have seen in the movies. The author shares everything: the stress, heat, death and dying, sorrow, regret and anger, and finally looking back to America at the time, and placing the blame squarely where he believes it belongs, on the politicians.

“Veterans and warfighters are appreciated today, yet Vietnam veterans have been an underclass of Americans for more than 50 years, primarily because the press and the people blamed the loss of the was on the men doing the fighting rather than the men who put them there,” Davis says. “It’s past time for Americans to understand what that conflict was like, and how it has affected an entire generation of American men.”

“My War in the Jungle” is available for purchase online at the Archway link above, at Barnes & Noble and on Amazon at: http://www.amazon.com/My-War-Jungle-Long-Delayed-Lieutenant/dp/1665700815.

About the Author
Gordon Miles Davis, known to his friends as Miles, was born into a Marine family at the beginning of the baby boom. A year before graduating from college he was faced with getting drafted or getting a commission. He became a Marine officer, like his father, and spent most of a year on the ground as an infantry platoon commander in Vietnam. Upon returning to the United States, he attended law school, and after many years practicing as a civil trial lawyer, was appointed to the bench as a United States magistrate judge.