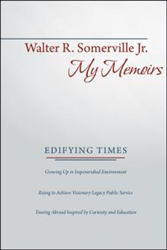 Walter R. Somerville Jr. recalls more than 50 years of public service, including his role helping women and minorities as chief of civil rights for the United States Coast Guard in his new book, “My Memoirs: Edifying Times” (published by Archway Publishing). Somerville looks back at a lifetime of making a huge difference in the lives of ordinary people and living an active life after retirement.

Walter R. Somerville Jr. grew up in humble circumstances with dreams of becoming a professional baseball player. But with a young daughter to take care of and bills to pay, he enlisted in the recently integrated Air Force in 1951. After serving a tour of duty in South Korea, he returned to the United States before being honorably discharged and then re-enlisting to work at the Air Force Reserve Center in Baltimore. Eventually, he became a civilian Air Force Reserve technician at Andrews Air Force Base before taking a job at the Federal Aviation Agency.

He went on to work other jobs before becoming a chief with the Coast Guard’s Civilian Equal Employment Opportunity Division, in 1970. Later, he was appointed to a senior executive service position as chief of civil rights, the military equivalent of rear admiral in the United States Coast Guard.

“My Memoirs” is a motivational story that contributes to the diversity of thoughts and ideas in American society that Somerville believes readers will find both relevant and appealing. He hopes “Readers can envision what is possible when a visionary civilian civil rights policy advisor's actions and decisions are supported by the commandant (head of the USCG).”

The book is available for purchase at: https://www.amazon.com/My-Memoirs-Walter-Jr-Somerville/dp/1480873942.

About the Author
Walter R. Somerville, Jr. did not let growing up relatively poor prevent him from becoming assistant commandant for civil rights in the United States Coast Guard. In his 54 years of public service, he supported a Coast Guard culture that values diversity, a 21st century recruiting initiative, the creation of the Coast Guard JROTC program and other initiatives. He is a graduate of the University of Maryland University College and a program for senior managers in government at the John F. Kennedy School of Government at Harvard University.