New Bestseller "REBOUND: From Pain to Passion - Leadership Lessons Learned" by Matt Doherty intersects sports with the importance of leadership, coaching, and business 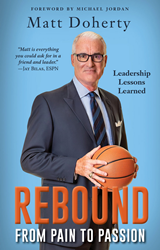 "Setbacks are an opportunity for growth."

REBOUND will help anyone in a leadership position.

"Setbacks are an opportunity for growth."
––Matt Doherty

Coach Roy Williams, Head Coach, University of North Carolina said, "I've known Matt since he was a senior in high school in Long Island. I helped recruit him and helped coach him at North Carolina, and he was on my coaching staff at Kansas for seven successful seasons. He's always been a very intelligent person, player and coach, and the many experiences he shares in REBOUND, including how to deal with both successes and adversity, will help anyone in a leadership position."

Matt Doherty played and coached basketball at the University of North Carolina. He started on the 1982 National Championship team coached by the legendary Dean Smith while playing alongside NBA stars Michael Jordan and James Worthy. He went on to a successful career in coaching. First as an assistant coach at Davidson and then at Kansas. In 1999, he was named head coach at the University of Notre Dame which for an Irish Catholic kid from Long Island was an incredible opportunity. One with which he anticipated would last a long time. However, in June 2000, Bill Guthridge, then head coach at UNC decided to retire and Roy Williams was expected to replace him. When Williams turned down the opportunity, UNC turned their attention to Matt Doherty and with the help of Michael Jordan, Dean Smith recruited him to come "home" as the head coach of the UNC Tar Heels.

In 2001, UNC won the ACC Regular Season Championship and Doherty was voted 2001 AP National Coach of the Year. Two short years later, he was forced to resign from his dream job.

What went wrong? Why did this happen? How do you go from reaching the top of the mountain to falling off the cliff? How do you prepare for your next opportunity? You Rebound!

For Matt Doherty that meant recognizing the need to learn how to become a better leader. With the support and encouragement of family, friends, and respected colleagues he embarked on a leadership journey. A journey that began by studying at The Wharton School and The University of Virginia Darden Graduate School of Business. Inspired by the help of top leadership executives, he learned many valuable lessons, and turned his "Pain to Passion."

Now in a straight forward and authentic manner, he shares his personal life journey told through a series of engaging and riveting stories of both his successes––and failures. Drawing from his personal and very eye-opening learning experiences, he hopes this book will serve to inspire, encourage, and help others create a game plan that will help them navigate the rough seas of leadership through life and in business.

"Not everyone is a born leader," says Doherty. "But EVERYONE can become a better leader." Whether coaching a sport, running a company, or leading your family there are skills that can be developed to put you and your organization in position for success.

Books are available online and bookstores.

Matt Doherty played and coached basketball at the University of North Carolina. He started on the 1982 National Championship team with NBA greats Michael Jordan and James Worthy. The program was led by legendary coach Dean Smith. After one year as the head coach at Notre Dame, Matt took over the UNC program and led them to the 2001 regular season ACC Championship while being named AP National Coach of the Year.

Since his time at UNC, Coach Doherty worked as the head coach at FAU and SMU in addition to working at ESPN, the Indiana Pacers and the Atlantic 10 Conference. He currently runs the Doherty Coaching Practice which includes executive coaching, seminars, and corporate talks. He continues to work in the media with weekly radio shows in Charlotte on WFNZ (sports talk) and WBT (news and current events), and the ACC Network where he is a color analyst for basketball games. Matt is married to Kelly and has two children, Tucker and Hattie. They reside in Mooresville, NC.