New Book, Becoming the Change, Calls for a Revolution in How Healthcare Executives Behave and Lead

The authors, two renowned healthcare transformation experts, provide examples and a blueprint illustrating how leaders can embrace the behaviors that create positive and lasting organizational change, according to the nonprofit the Lean Enterprise Institute, a co-publisher. 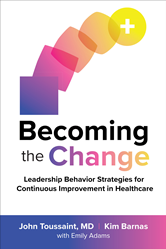 Two healthcare executives write that leaders must abandon traditional command-and-control behaviors for modeling behaviors such as perseverance, respect, and willingness to change.

"Executive behavior based on such principles is critical during the pandemic because it unleashes staff creativity in solving the myriad problems caused by the crisis. Conversely, leaders who are full of answers and directives will shut down staff initiative."

Healthcare is in the midst of a massive disruption caused by the coronavirus pandemic. With financial structures in tatters and the future uncertain, two experienced healthcare transformation experts aver that now is the time for executives to adopt a different approach -- a personal approach -- to robust organizational improvement.

Past improvement efforts at hospitals and healthcare systems often plateaued or even deteriorated over time. In their new book Becoming the Change, authors John Toussaint, MD and former health system CEO, and Kim Barnes, Catalysis CEO, identify the main reason for the relapses: CEOs, boards, and executive teams are disconnected from organizational improvement work.

“We know this is true because every time we examined an organization that was having trouble sustaining its improvement efforts, we found executives stuck in command-and-control style management,” they write. “And every time we found an organization that was spreading its improvement work and finding new solutions, there were leaders who displayed humility, curiosity, self-discipline, and other traits that were crucial to their efforts.”

Principles for the Pandemic
Executive behavior based on such principles is critical during the pandemic because it unleashes staff creativity in solving the myriad problems caused by the crisis. Conversely, leaders who are full of answers and directives will shut down staff initiative.

Drawing on strong field research, evidence from several healthcare systems, and their personal experiences from years at healthcare’s frontlines and in executive suites, the authors reveal that the most important part of improvement work is personal.

Leaders must get out of their offices and abandon authoritative management styles. They must show support in person for caregivers at the frontlines and model behaviors such as perseverance, respect, and willingness to change. In other words, they must become the change.

The book includes an appendix with practical, tested tools for leaders to use in assessing their current behaviors and gauging progress toward new ones.

Becoming the Change showcases executives in health systems around the world as they:

About the Authors
John Toussaint, MD, is the founding CEO of Catalysis, the first mission-driven, nonprofit to develop educational programs to improve the healthcare industry. He is the former CEO of ThedaCare, a large Wisconsin healthcare provider, and the author of the bestselling On the Mend. His comments and articles about improving healthcare quality, cost, and delivery have appeared in the New England Journal of Medicine’s Catalyst, Mayo Clinic Proceedings, Harvard Business Review, TIME, The Wall Street Journal, the CNBC blog, and the Milwaukee Journal Sentinel among other outlets.

Kim Barnas is CEO of Catalysis and a recognized authority in creating fully integrated leadership in hospitals around the world. Formerly, she was a senior vice president at ThedaCare, and president of Appleton Medical Center and Theda Clark Medical Center. She is the author of Beyond Heroes: A Lean Management System for Healthcare, winner of a Shingo Publication Award. Kim holds a master’s in healthcare administration.

About Catalysis
Catalysis inspires healthcare leaders and accelerates change. With a focus on experiential education, Catalysis helps healthcare leaders in the United States, Europe, and Africa create transformative change which is patient-centered focused on delivering higher quality lower-cost care. Founded in 2008 in Appleton, WI, Catalysis is a nonprofit whose mission is to transform healthcare through the method of lean thinking. Learn more at http://www.createvalue.org.

Praise from executives for Becoming the Change

Becoming the Change co-author Kim Barnas is CEO of Catalysis.