In support of the American people, author defends President Trump and explains how he has improved the lives of Americans, unlike other politicians. 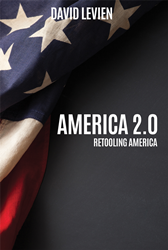 This book stands up for President Trump, supports our war fighters and law enforcement, our farmers, ranchers, and assembly line workers.

America 2.0: Retooling America defends America and President Trump against the corrupt assaults from the Democrats and other swamp creatures and explains how the delusions of those in the administrative state led them to mount a coup attempt against the American government. Levien wrote this book for all Americans to protect a great patriot and humanitarian, President Trump, who is rapidly improving the lot of people in the heartland and people in forgotten neighborhoods that have been exploited by Democrats, in neighborhoods allowed to decay by the Democrat insiders.

“This book stands up for President Trump, supports our war fighters and law enforcement, our farmers, ranchers, and assembly line workers. It supports our doctors, nurses, and firemen and anyone who comes home tired at the end of a long day” said Levien.

Dr. David Levien is a retired surgeon and intensivist, educator, and author with an MBA. He states that his qualifications come not from degrees but from empathy with fellow Americans and from years of observation where the rubber meets the road. Levien is a healer, an author, an educator, an executive, and board member. He is eager to be conciliatory, which will only be possible when the Democrat oligarchs forsake corruption and venality. Levien has also written Don’t Tread on America.