We can protect our emotions from negative spiritual influence by understanding the concept of "like attracts like." 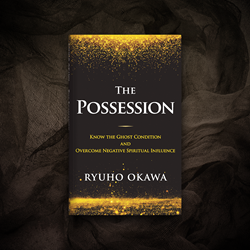 Ryuho Okawa connects spiritual and psychologically unconscious influences as one in the same.

Okawa introduces "spirit possession" as the presence of a spirit, or spirit group, that exerts influence over a person from a non-temporal state. Such an influence can be malevolent or benevolent, such as angelic intercession. Okawa describes the universal rule of “same wavelength attraction” and how our thoughts can attune to certain spiritual conditions that may influence our emotions. In this way, Okawa states that one may essentially invite a spiritual association in accordance with one’s attitudes and behaviors, because “like attracts like.”

While the methods outlined in "The Possession" are oriented toward Buddhists, specifically members of Happy Science, they extend to anyone who has faith or a general spiritual awareness. Three key considerations that Okawa describes as being important to avoid malevolent "spirit possession" include: accepting self-responsibility instead of blaming others, maintaining a sense of faith in God, and striving to embody love, wisdom, self-reflection and progress. In coordination, a person will sympathetically attract benevolent forces into their sphere of influence. This requires daily practice, but is worth the effort to invite a greater degree of happiness and success.

Okawa presents the notion that spirits and psychologically unconscious influences are one in the same. Viewed from a psychological lens, "The Possession" outlines a path to ensuring a positive psychological state by means of attuning oneself with benevolent unconscious patterns and thoughts. Carl Jung described archetypes that exist within the collective unconscious of humanity, and likewise described the manner in which they may exert influence over an individual or group consciousness. Okawa expands upon the teachings of Carl Jung by providing practical methods for aligning oneself with compassionate archetypes or spirits.

When the importance of "spirit possession" is considered in the context described, it is evident that there is a spiritual or unconscious influence cast over people at any given time. Such pertains to geo-political events, as much as it does to the lives of individual people, and is accordingly a relevant topic of consideration amidst these turbulent times. This concept forms the basis for understanding many of Okawa's books, and in particular his “spiritual interview” series. For those who enjoy Okawa's works, for those who may struggle to understand them, and to those who have yet to begin their journey through his extensive body of work, "The Possession" will prove to be a book of great value for spiritual development.

"The Possession" is available at all major bookstores nationwide, including Barnes & Noble and Amazon.