Recent events have led to attacks on the rights and liberties of the American people. Paul Engel's new book can help everyday Americans cut through the clutter and fake news and claim the blessings of liberty our Founding Fathers secured for us. 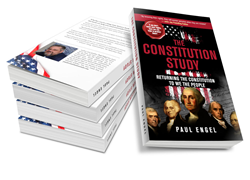 Paul’s expansive knowledge of the U.S. Constitution is invaluable to anyone looking for insightful information about our Nation’s founding documents. Winston Wang, Administrator, The Bipartisan Press

Studies show that 30%-40% of Americans cannot name a single freedom protected by the First Amendment. Even students in most law schools don’t study the Constitution, they study judges opinions about it called “Constitutional Law”.

Follow the news and you’ll see that not only do most Americans not know what the U.S. Constitution says, but even judges, lawyers, and politicians often misquote or misrepresent the supreme law of the land. The Constitution Study was created to show that everyone can read and understand the Constitution and learn to apply it in their own lives. Written in plain, conversational English, The Constitution Study is not targeted at academia or legal scholars, but at the true foundation of our republic: We the People. Whether you’re a long time history buff or just starting out, this book can help you read and study the Constitution.

The Constitution Study is one of my most highly recommended Constitutional Education sources available.

Jessie Rude, Executive, Constitutional Grass Roots Movement
It doesn’t take a law degree to understand the supreme law of the land. Most people can read the Constitution in about 20 minutes. And if you’re worried about the language being difficult, this new book can help.

Paul’s expansive knowledge of the U.S. Constitution is invaluable to anyone looking for insightful information about our Nation’s founding documents.

The website also has links to other books Paul has written and a list of events he will be participating in. He is also available for interviews regarding constitutional questions.