Bill Townsend announces publication of ‘In Pursuit of the Moon’ 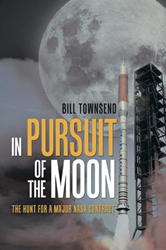 In 2007, NASA released a request for proposals for the development of the avionics unit — the brains — of a new launch vehicle intended to return humans to the moon for the first time in 40 years, before proceeding on to Mars. In the new book “In Pursuit of the Moon: The Hunt for a Major NASA Contract” (published by iUniverse), author Bill Townsend tells the story of how he led the effort to win a major NASA contract intended to help NASA return to the moon.

The book is the story of Ball Aerospace’s pursuit of this opportunity, while competing against four other major aerospace company teams, with almost $1 billion of new work at stake. It follows the day-to-day activities of Ball Aerospace’s efforts to unseat the “entrenched, incumbent aerospace contractors” who had dominated NASA’s Human Space Flight program for decades. Since Ball Aerospace was less than a tenth of the size of its competitors, Townsend shares how this was a “David versus Goliath story.” The book also explores how NASA behaves and conducts itself with its contractor base sometimes in ways you would not expect.

Townsend wrote the book to inform readers and give them a better understanding of what goes on behind the scenes when the government, specifically NASA, announces a major contract award. He also gives readers in-depth information about the aerospace industry, the lessons learned from this particular pursuit with NASA and the need to tread carefully when competing with “entrenched incumbents.”

The book is available for purchase on Amazon at https://www.amazon.com/Pursuit-Moon-Hunt-Major-Contract/dp/1532079168.

About the Author
Bill Townsend has over 50 years of experience in the aerospace industry, with particular expertise in program and project management, both with NASA, and private industry. His broad aerospace background ranges from aircraft and spacecraft instrument development to developing international mission partnerships. He has held senior management positions both within NASA and private industry, ranging from acting associate administrator for earth science at NASA headquarters, to deputy center director at NASA’s Goddard Space Flight Center, to vice president and general manager for civil space systems at Ball Aerospace.