‘Soldiers in Petticoats’ by Betty Jamerson Reed recounts the lives and the accomplishments of Christian educators, Sophia Sawyer, Emily Prudden and Martha Berry. 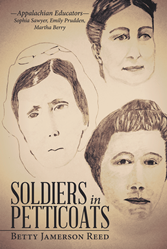 “Although their names rarely appear in mainstream histories, these women were inspired to make a difference. They became a driving force in small, neglected communities and are worthy of notice."

Through her ongoing research into the history of education, author Betty Jamerson Reed discovered the accomplishments of three women that, despite their hard work and diligence, had been all but forgotten. In her new book, Soldiers in Petticoats —Appalachian Educators— Sophia Sawyer, Emily Prudden, Martha Berry,” Reed brings to light their stories and the extraordinary impact they had on the lives of thousands of Cherokee, African American and impoverished white children in the Appalachian region.

Written in biographical style, “Soldiers in Petticoats” is a thorough examination of the role Sawyer, Prudden and Berry played in making learning more accessible to disadvantaged communities. To accomplish this goal, Reed researched the history of their respective times and locations, visited the sites where these educators taught, and sifted through letters, archival records, scholarly theses and dissertations, journalistic accounts and various other documents to learn about these women and the environments in which they lived and worked.

“For years, I pursued information about them,” wrote Reed. “My aim came to focus on the role of these educators within the populations they served. The large questions I pursued included what led such women to uproot themselves from home and family to serve small isolated communities and with such remarkable results.”

The book also illustrates the challenges these women faced due to both their gender and their controversial work with marginalized communities. Though Sawyer, Prudden and Berry lived and taught at different times from the mid-1800s through the mid-1900s, each educator encountered numerous challenges, such as discrimination, prejudice, threats of violence and financial hardships. However, they remained resilient in the face of hardship and demonstrated an interminable dedication to Christian service and education that all readers can admire and learn from.

“Although their names rarely appear in mainstream histories, these women were inspired to make a difference,” wrote Reed. “They became a driving force in small, neglected communities and are worthy of notice. My goal is to honor three heroines of education by documenting their personal courage and accomplishments.”

About the Author
Betty Jamerson Reed is an author and retired secondary teacher. Her previous books deal with the history of black schools in Western North Carolina: Brevard Rosenwald School: Black Education and Community Building in a Southern Appalachian Town, 1920-1966 (McFarland, 2004) and School Segregation in Western North Carolina: A History, 1860s-1970s (McFarland, 2011). Her poetry has been published in several anthologies and journals, including Eno Magazine. Reed's professional honors include being named an Outstanding Young Educator of North Carolina (1970) and receiving the Governor’s Award for Excellence in Teaching (1991). She has served on numerous committees including the Human Relations Council of Brevard, NC, the NC Mary Morrow Scholarship Committee and its sub-committee which developed the NC Teacher Cadet Program. Enriched by her family life, Betty lives with her husband on a farm near the Blue Ridge Parkway in Transylvania County, NC.