Author David Willis writes about the power of music and family in his novel, “Touch” 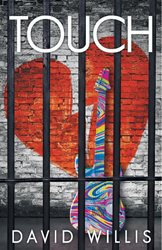 Willis’s ability to paint a clear picture of exhilarating concerts and intense situations will have readers hooked and wanting more.

In author David Willis’s incredible novel, “Touch”, readers are introduced to Garland Summers, a young man whose love for music is instilled in him by his family and the bands that fill the airwaves. He eventually forms his own band with his closest friends which marks the beginning of a thrilling journey for all of them. Inspired by the musical influences of their time to create their own unique sound, they quickly find success after releasing their first single and receive national recognition. Willis’s ability to paint a clear picture of exhilarating concerts and intense situations will have readers hooked and wanting more.

After finding fame, a life with his soulmate by his side is within reach for Garland until a terrible crime is committed and he is wrongly put behind bars. While fighting for his freedom and a chance to be reunited with his loved ones, another musical prodigy is born who will forever change the music industry. In addition to the book’s focus on music, this story is filled with cinematic moments and memorable characters whose lives weave a compelling story.

This coming-to-age tale is certainly filled with all the elements that make up a great story: adventure, romance and continuous suspense.

“David Willis … keeps you wanting to know what's going to happen next in every page and chapter of his book,” an Amazon reviewer wrote about the book. “He makes you feel the ups and downs, thrills and disappointments of all the main characters.”

“Touch” is truly a captivating tale that demonstrates the true impact of music during a transformative time in history. With more story to be told, a sequel is currently being developed to continue Garland’s unforgettable journey.

About the author
David Willis enjoys creating relatable stories that transport others on an emotional roller coaster that elicits cheer, a laugh, and maybe tears along the way. Passionate about writing, this is his debut novel. The story for “Touch” came to him in a dream and taps into his love for the music industry. He currently resides in Terrell, Texas and is developing his next novel.