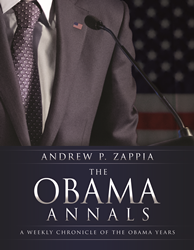 It is for the reader to judge how much America changed for the better under Mr. Obama, and how much hope endured

From the moment President Barak Obama was elected, Zappia knew this presidency would change America in ways no other administration had. He was inspired to keep an account of Obama’s time as U.S. President, writing down each week’s happenings within days of their occurrence. Now, he is finally ready to share his painstaking collection with anyone interested in the full account of this man’s eight years at the very summit of American politics.

“What emerges from this chronicle is a history of the man, his times, and his efforts to transform America based on a liberal vision. It is for the reader to judge how much America changed for the better under Mr. Obama, and how much hope endured,” said Zappia.

Andrew Zappia is an attorney who lives in Rochester, New York with his wife and two children. He has authored articles on various legal, historical, and current event topics, including pieces published in Legal Times, Crisis Magazine, the Rochester Democrat & Chronicle, Diversity & Division Magazine, the New Jersey Law Journal, and other publications. He is also the author of the Franchise Law chapter in the treatise “Commercial Litigation in New York State Courts”.

Liberty Hill Publishing, a division of Salem Media Group, is a leader in the print-on-demand, self-publishing industry. The Obama Annals is available online through amazon.com and barnesandnoble.com.