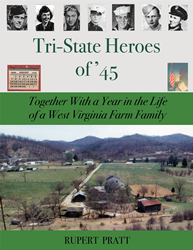 … deep roots in my West Virginia place may have inspired me to preserve, in a unique way, a little piece of history.

Anyone alive in the United States in 1945 will likely have stories about it. It was an unforgettable year in this country, as well as in the world at large. Pratt has captured both the simple, daily life of his middle-aged mother and himself as a boy, along with the amazing military exploits taking place at the same time. He shares memories from his West Virginia farm life, as well as preserving many stories of military heroes published in local newspapers.

“… deep roots in my West Virginia place may have inspired me to preserve, in a unique way, a little piece of history. The knowledge that the 'little’ stories might be lost was not acceptable,” said Pratt.

Rupert Pratt grew up on a small farm in Salt Rock, West Virginia. After four years in the Air Force, and earning two degrees from Marshall College, he taught school in Cabell County, West Virginia and Schenectady, New York. He is also the author of Touching the Ancient One, a story about a tragic airplane crash in Alaska and the impact it had on the survivors and families of the victims.

Mill City Press, a division of Salem Media Group, is a leader in the general market division of self-publishing. Tri-State Heroes of ‘45 is available online through amazon.com and barnesandnoble.com.