Pioneer Institute book urges Catholic schools to focus on what sets them apart and innovation, and policy makers to eliminate barriers to public support for them. 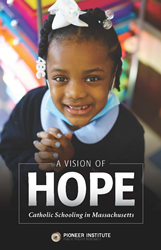 A Vision of Hope: Catholic Schooling in Massachusetts

“K-12 education is designed to produce active participants in our democracy. A deep research base confirms that Catholic schools produce citizens who rate higher for tolerance, political knowledge, and community involvement than their publicly schooled peers.” - Jamie Gass, PioneerEducation Director

Catholic schools in Massachusetts must focus on the characteristics that make them academically successful and distinguish them from traditional public schools, but must also seek new models and governance structures that will help them achieve financial sustainability, according to a new book published by Pioneer Institute.

At the same time, barriers to public support of the schools should be eliminated. Catholic school parents pay tuition as well as taxes to support schools their children don’t attend, saving state and local taxpayers hundreds of millions of dollars a year.

The book, "A Vision of Hope: Catholic Schooling in Massachusetts," will be the topic of a webinar co-sponsored by Pioneer and the Catholic Schools Foundation to be held on Wednesday, January 27 at 2:00 pm. It will feature co-editors Cara Candal and Chris Sinacola, Archdiocese of Boston Superintendent Thomas Carroll, University of Arkansas Distinguished Professor of Education Policy Patrick Wolf, and Mary Connaughton, Pioneer’s director of government transparency and also a Catholic school parent.

Those interested can register for the webinar here. The Kindle version of the book will also be available on January 27th at https://www.amazon.com/dp/B08SQ6FCMR. Learn more about the book here.

Catholic schools in Massachusetts deliver high test scores, high college attendance and graduation rates. The majority of elementary schools in the Archdiocese of Boston are in urban areas and disproportionately serve poor and minority families.

Catholic schools achieve all this despite having far fewer resources. Average annual tuition at an Archdiocese of Boston elementary school is $6,583, and most families receive financial aid. Even though the schools rely on charitable donations to fill the gap between revenues and costs, overall spending is still well below average public school per-pupil spending in Massachusetts, which is nearly $16,500.

Parents are also drawn to the unrelenting focus on achievement, a classic liberal arts education, discipline, and values that are part of a Catholic education, which explains why nearly 20 percent of the students enrolled in Archdiocese schools aren’t Catholic.

Despite these outstanding results, the number of Catholic schools in Boston has fallen from 225 in 1942 to 100 in 2020. Twenty have closed since 2015 and another 10 have shuttered during the pandemic. Statewide, Catholic school closings have had a disproportionate impact on poor and working-class communities like Boston, Chelsea and Lowell.

There are a number of reasons for the long-term decline. With a drop in the numbers of nuns and priests beginning in the 1960s and ‘70s, schools are now staffed with laypeople who must be paid a living wage.

Boston’s busing crisis accelerated the trend of Irish and Italian families moving to the suburbs. Many of these families, whose children attended Catholic schools in Boston, were more comfortable enrolling their children in suburban public schools. This has created a mismatch: More of the families who might attend Catholic schools are in the suburbs, but most of the schools themselves remain in the city.

Catholic educators are developing new models to address these challenges. Traditional parish schools are being consolidated into academies that can serve more students and maintain low tuition. In Brockton, Trinity Catholic Academy reflects the city’s cultural and ethnic diversity, and 90 percent of its students are showing growth at or above grade level in reading and math.

Cristo Rey schools, which were founded in Chicago in 1996 and serve disadvantaged students, are another promising model. Students work five full days a month for local businesses, and their pay goes directly to the schools to help cover tuition. Sixty-to-70 percent of the cost of education is covered by the work-study program, 20-30 percent by fundraising, and just 10 percent comes from tuition.

The network now includes 37 schools in 23 states, including one in Boston and one in Lawrence. In the decade prior to the COVID-19 pandemic, 23 of the 62 Catholic schools that opened in the U.S. were Cristo Rey schools. In addition to work-study, they offer a very rigorous curriculum, with every graduate being accepted to college in most years.

Catholic schools also received good news last year in with the U.S. Supreme Court’s ruling in Espinoza v. Montana Department of Revenue. The Court took an important step toward invalidating so-called Blaine Amendments to the constitutions of Massachusetts and many other states that prohibit public money from flowing to religious schools by holding that if a state decides to direct aid to non-government institutions, it cannot exclude faith-based institutions from that aid solely because they are faith-based.

In the book, co-authors Ken Ardon, Jason Bedrick and Martin F. Lueken propose a tax credit scholarship program for Massachusetts that would likely have been impermissible prior to Espinoza. Under these programs, taxpayers receive credits for contributions to scholarship granting organizations that provide students with funding to attend schools other than their assigned public school.

There are 24 such programs in 19 states that serve more than 300,000 students. Almost all are need-based.

A consensus of high-quality research finds that tax credit programs produce better test scores, as well as higher graduation and college attendance rates. Twenty-five out of 27 studies in one recent literature review also found that the incentive to compete for students produced better outcomes at the public schools from which scholarship recipients come.
“Not only do tax credit programs improve outcomes for both recipients of the credits and the schools they came from, but they also produce off-the-charts satisfaction rates among parents,” said Pioneer Executive Director Jim Stergios.

For Massachusetts, Ardon, Bedrick and Lueken propose a program with eligibility set at 250 percent of the federal poverty line ($65,500 for a family of four in 2020). It would provide 10,000 tax-credit scholarships to qualifying families — averaging $4,050 in the first year and rising with inflation. Donors to scholarship granting organizations would receive a 90 percent tax credit. The program would either be revenue neutral or save money for the state and would produce savings for school districts.

In addition to the tax credits, recommendations from the book’s various authors also include repealing the Commonwealth’s Blaine Amendment, which was a product of anti-Catholic bias, and bringing an end to practices that resulted in the U.S. Department of Education finding that the Massachusetts Department of Elementary and Secondary Education has failed to comply with provisions of the federal Individuals with Disabilities Act that require providing equitable, publicly funded special education services to students at private schools.
A Vision of Hope: Catholic Schooling in Massachusetts includes nine chapters from a range of different authors. There is also a foreword by George Weigel, author of an international bestselling two-part biography of Pope St. John Paul II, and an introduction from former Ambassadors to the Holy See Raymond Flynn and Mary Ann Glendon.

About the Co-editors
Cara Stillings Candal, Ed.D., serves as Director of Educational Opportunity, focusing on private school choice, for ExcelinEd. Candal has spent the last 10 years working in education policy as a Senior Fellow with both Pioneer Institute and the Center for Education Reform. She was also a founding team member of the National Academy of Advanced Teacher Education (NAATE) and a research assistant professor at Boston University in the Department of Educational Leadership and Development. Candal has authored/edited more than 25 papers and three books on education policy. She earned a Bachelor of Arts in English Literature from Indiana University, a Master of Arts in Social Science from the University of Chicago, and a Doctor of Education from Boston University. Candal is the author most recently of Pioneer Institute’s book, The Fight for the Best Charter Public Schools in the Nation.

Chris Sinacola is a writer and editor with more than 30 years’ experience in the fields of journalism, marketing, health care, and freelance writing. From 1987 until 2015, Sinacola was an editor, reporter, columnist, and editorial page editor at the Worcester Telegram & Gazette. He is a local historian, having authored Images of America: Sutton (2004) and Images of America: Millbury (2013) from Arcadia Publishing. He edited Pioneer Institute’s book, The Fight for the Best Charter Public Schools in the Nation (2018). Sinacola holds a Bachelor of Arts in Italian Language and Literature from Wesleyan University.

Pioneer’s mission is to develop and communicate dynamic ideas that advance prosperity and a vibrant civic life in Massachusetts and beyond.

Pioneer’s vision of success is a state and nation where our people can prosper and our society thrive because we enjoy world-class options in education, healthcare, transportation and economic opportunity, and where our government is limited, accountable and transparent.

Pioneer values an America where our citizenry is well-educated and willing to test our beliefs based on facts and the free exchange of ideas, and committed to liberty, personal responsibility, and free enterprise.

Praise for "A Vision of Hope: Catholic Schooling in Massachusetts":

“Pioneer’s book A Vision of Hope: Catholic Schooling in Massachusetts highlights why K–12 Catholic education is the crown jewel in a state long known for academic excellence. This is a must read for those who care about the future of Catholic schools in the Commonwealth, while also offering key lessons for policy makers across the country.”

“For over two millennia, the Church’s sacred mission has kept alive the West’s precious heritage and culture, while serving as a spiritual beacon to the world. As Pioneer Institute’s new book,
“A Vision of Hope,” makes clear, K–12 Catholic schooling helps lead the young toward these ideals, which are needed now more than ever.”

“Pioneer Institute has done a great service by bringing together a range of leading thinkers on the vital role Catholic schools play in forming the next generation: shaping the whole human person through moral, theological, and philosophical instruction. This is an important book for the future of K–12 Catholic education and religious liberty.”

“Catholic schools play an enormously important role in K–12 education in America, especially in the inner city. Pioneer Institute’s new book, “A Vision of Hope: Catholic Schooling in Massachusetts,” shines a light on the great work Catholic schools do, the innovations they’ve made in the last 25 years, and the need to support them through school choice legislation.”