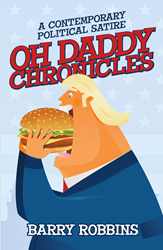 Today, author Barry Robbins announced the publication of his new book of political satire, Oh Daddy Chronicles, which offers a fresh, hilarious lampooning of President Donald Trump and those who surround and enable him. Written in episodic style, the 224-page book features 46 short, skit-like chapters that give the book the feel of Saturday Night Live. Robbins is a former accountant who has a keen interest in things having nothing to do with accounting. Spending 12 years in Finland changed his outlook on American life, leading him to see the humor in the current political situation.

For example, Robbins asked, “Why was the President so much into hydroxychloroquine? What was the true story behind the President walking to St. John’s Church to hold up a Bible? How did the President’s cognitive impairment exam turn out? What strings were pulled to get Don Jr. out of his Mongolian mess after killing an Argali sheep without a permit? This book has answers to several mysteries.”

Oh Daddy Chronicles will evoke a sigh of relief for many readers. For instance, Episode 20, "Twit-In-Chief,” deals with an imagined telephonic conversation between Donald Trump and Jack Dorsey, the CEO of Twitter. Barry Robbins has also imaginatively written some pages on the post-pandemic fate of Melania Trump, Ivanka Trump, and Jared Kushner. No one and no thing is safe in Oh Daddy Chronicles.

The book was born during the stay-at-home days of the early COVID-19 pandemic. It is a perfect read for “Never-Trumpers” who need an antidote to anger and frustration. Laughing at the Orange One and his sidekicks is what Oh Daddy Chronicles is all about. Robbins noted, “Although it might seem counterintuitive, Oh Daddy Chronicles might very well be the perfect gift for the Trumper in your life. Just make sure you socially distance when you give it to him or her.”

About the Author
Barry Robbins is a retired accountant, recently relocated to Florida after a 12-year stint in Finland. While there, he picked up a new set of eyes, giving him a different perspective on life in the U.S. He graduated from the Wharton School of the University of Pennsylvania in 1975 with BS and MS degrees. He worked 26 years for a large international accounting firm. Then, he quit. He moved to Helsinki, Finland with his Finnish wife and two beautiful daughters. After living there full time for 12 years, he began dividing his time between Finland and Florida. He now spends most of his time in Florida.