Sixty Degrees Publishing will release Michael Bowker's 20th book and first novel on February 11, 2020. Passage Pictures has optioned the book, Gods Of Our Time, for a motion picture. 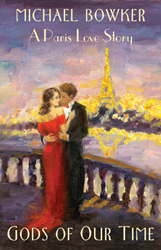 Gods Of Our Time

"The author recreates the period of the 1920's in Paris in a tale full of culture, passion, self-exploration, and so much more. It is a riveting read that will tug on the reader's heartstrings."

Bowker’s first 19 books were non-fiction. This is his first novel. Random House, Rodale, Simon and Schuster and others have published his previous books. His first book, Playing from the Heart, just surpassed one million copies. Passage Pictures has optioned Gods Of Our Time for a motion picture.

The emotional and powerful novel transports readers back to the robust energy and romantic lights of 1920s Paris. It chronicles the life of Sophie Masson, a painter and healer and woman far ahead of her time. It is a story of culture, passion and self-discovery as she meets Jake, an irresistible American journalist, sent to Paris to interview the great artists gathered in France -- Hemingway, Picasso, Fitzgerald and others.

The author says, “I didn’t know where love ended and literature began. This book is a life long dream condensed into 260 pages.”

Former Simon and Schuster editors write, "The author recreates the period of the 1920's in Paris in a tale full of culture, passion, self-exploration, and so much more. It is a riveting read that will tug on the reader's heartstrings. The writing is emotional and powerful...Overall this compelling story offers readers a dose of drama, romance, relationship tension, and even personal growth. The plot is refreshing and the characters are people with whom the readers can emotionally connect...It's a marketable and enjoyable read."

Bowker has written 20 books, over 4,500 articles, 2 CBS Movies of the Week and 3 Lifetime Movies. His stories have been featured on ABC, NBC, CBS, 20/20, the Oxygen Channel, Reader’s Digest and other outlets. For more information, visit: https://www.godsofourtime.org/

About Sixty Degrees Publishing-
Established in 1999, Sixty Degrees Publishing is a promotional company based in Santa Barbara, California. Other titles include Winning the Battle Within, Fatal Deception, Takin’ Over, The Visionary Leader and numerous other inspirational and transformative works. For more information, visit: For more information, visit: https://www.sixtydegreespublishing.com