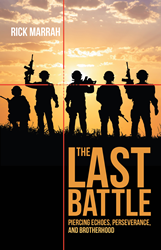 Spiritual battles rage all around us in the form of sickness, poverty and hate . . . Regardless of the type of battle you may be facing, unity and love are the greatest weapons we have.

In times of uncertainty and despair, books—especially those that offer a message of comfort or inspiration—are a welcomed distraction from the constant barrage of bad news. In his debut novel, “The Last Battle,” author Rick Marrah demonstrates the perseverance of hope and love over darkness.

Set during a fictional war that takes place between World War II and the Vietnam War, the book follows Colonel William George as he leads his soldiers through a victorious final battle. The war comes to an end, and he begins to reflect on his many years of military service, the meaningful relationships he has formed and the conversations that have impacted him the most. Engaging in the joyous camaraderie that follows, he grows even closer to his fellow servicemen as they divulge their homecoming plans and dreams of the future.

However, the celebration ceases when a nearby enemy camp refuses to acknowledge surrender. Colonel George quickly devises a defense plan that, while successful in forcing the enemy to retreat, results in devastating loss. As he grapples with the mixed emotions of joy, excitement, grief and heartbreak, he finds comfort in the deep spiritual discussions he has with other men and realizes that hope and peace can always be found in God’s loving arms.

By writing “The Last Battle,” Marrah seeks to encourage readers to never lose sight of hope and to choose love and unity over hate. Additionally, he wants readers to know that, despite the personal battles they may be facing, they can always turn to God for spiritual support.

“Spiritual battles rage all around us in the form of sickness, poverty and hate,” said Marrah. “I wanted to represent this though the obvious scenes of real-life warfare. I also want to honor those in our military—past and present—that fight the physical battles on our behalf and stand in the gap for us. Regardless of the type of battle you may be facing, unity and love are the greatest weapons we have."

About the author
Rick Marrah has his master’s in Pastoral and Clinical Counseling from Ashland Theological Seminary and has worked with Young Life. He acted for various production companies and now works in corporate human resources. He and his wife, Denise, have six children in their blended family. They enjoy family time, their pets, the outdoors, physical fitness and motorcycles.