New book shares a collection of real-life aviation experiences before, during and after the Cuban Missile Crisis 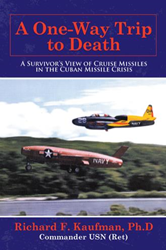 The story is the only episode in our history where we came so close to destroying the world.

An autobiographical sketch of Kaufman’s experiences as a Navy guided missile officer and chase pilot for the Regulus cruise missile, the book also covers cruise missiles and other pilots who flew them. At the time, the author’s mission was a one-way trip to insure its delivery to a Soviet naval target on the Kamchatka Peninsula in the Soviet Union. The story begins with the coming of the first cruise missile; the Kamikaze of World War II. By all standards, it is the first cruise missile controlled by humans who were committed to the death. The epilogue discusses the ultimate cruise missile by the time the Gulf War arrived, and how it arrived as an efficient combat weapon. The long and arduous experiment from the Kamikaze to Regulus, and from Regulus to the ultimate cruise missile had arrived by the time of the Gulf War.

“It relates to the fears we have today for nuclear war,” Kaufman says of his book. “The story is the only episode in our history where we came so close to destroying the world. We learn from the past to live today.”

“A One-Way Trip to Death” is available for purchase online at the Archway link above, at Barnes & Noble and on Amazon at: https://www.amazon.com/One-way-Trip-Death-Survivor%C2%92s-Missiles/dp/1665702451.

About the Author
Richard F. Kaufman, a United States Navy commander retired in 1970 after serving 24 years of service. He holds the Distinguished Flying Cross along with seven Air Medals received from previous combat duties. During the Cuban Missile Crisis, he was the GMGRU-1 aircraft and missile maintenance officer. Following that event, he was assigned to the Naval Air Systems Command where he received a patent for an Automatic Missile Guidance System, used in several Navy missile systems. Kaufman received his doctorate from the University of Texas in 1974 and continued his career teaching at Texas Christian University and California State University as a full professor. Today he lives in California and is a full professor emeritus.