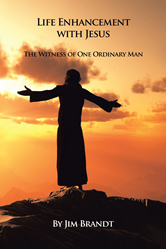 “’Life Enhancement with Jesus’ serves as my witness account of how following the lessons of Jesus can improve the life of one ordinary man,” said Brandt.

“Life Enhancement with Jesus: The Witness of One Ordinary Man” by Jim Brandt reminds readers this New Year of the importance of living the values of a Christian life and that there is no better time than now to start. Through the compilation of life altering events, such as his time as a college football player, a Marine Corps Veteran, founder of a software company, a banking executive and in politics, which required Brandt to put full trust in God, he provides lessons to others so they can learn from his experiences and become devoted followers of Christ sooner than he did.

Although Brandt was raised as a Christian, he did not always focus on his Christian beliefs while raising his own children, which he came to later regret. This book was written, in part, to let his children know how much God has played a role in all aspects of his life, starting from when he was a kid to present times.

“’Life Enhancement with Jesus’ serves as my witness account of how following the lessons of Jesus can improve the life of one ordinary man,” said Brandt. “After writing my book I realized that I could help others learn from my mistakes sooner in life than I did.”

No matter the age, level of spirituality and the incidents one has encountered in their life, readers will find the events Brandt describes in “Life Enhancement with Jesus” relatable and inspiring. To learn more please visit, http://www.legroup.us.

About the author
Jim Brandt is a devout and lifelong Christian. He boasts a variety of achievements including time as a star college football player, as an Officer and Pilot in the Marine Corps during the Vietnam War and was trained at Quantico, founder of a software company, executive for a subsidiary of the fifth-largest bank in the U.S. and having won the primary election for U.S. Congress twice. Brandt is married with adult children and currently resides in Southern California. He also is the founder of Life Enhancement Group, which is a group committed to improving people’s lives using teachings from Jesus. “Life Enhancement with Jesus” is Brandt’s first book in a planned series with his next book to include other people’s witness accounts.