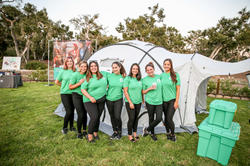 “We are thrilled to designate Santa Barbara as the permanent headquarters for ShelterBox USA. This community has embraced the global humanitarian efforts of ShelterBox, with hundreds of volunteers, Rotarians, and donors from across the county supporting the lifesaving mission," says Kerri Murray.

ShelterBox USA welcomes Robyn Laguette-Rivera as the organization’s new Chief Financial Administrative Officer (CFAO) and Stephen Masterson as a new Board Member. Additionally, ShelterBox USA is pleased to announce that the organization is officially moving its headquarters to Santa Barbara, CA.

In the newly created role of CFAO, Laguette-Rivera will be responsible for leading the organization’s financial operations, as well as its Human Resources, Administrative and IT functions. She brings more than twenty years of financial and operational experience to ShelterBox USA. Most recently, Laguette-Rivera served for nine years as the Chief Financial and Operations Officer at SeaVees, an iconic California footwear brand. She was instrumental in scaling SeaVees’ financial and operational structure from the company’s concept through seven years of rapid growth and ultimately, to the sale of the company.

Prior to SeaVees, Laguette-Rivera served as the Executive Director of Finance and Accounting at ABC-CLIO and as the Vice President of Finance at Global Brand Marketing Inc. She also worked in finance positions at IBM and Software.com. She serves on the Board of Directors of Old Spanish Days and has worked with several nonprofit organizations, including 1% for the Planet, Storyteller Children’s Center, Angels Foster Care and Gals Give Back.

Born and raised in Santa Barbara, Laguette-Rivera expressed her excitement about joining ShelterBox USA, saying “I am thrilled to be joining the ShelterBox team. It is a privilege to be a part of an organization with such a significant global impact.”

In addition to a new CFAO, ShelterBox USA is thrilled to announce that Stephen Masterson will join the nonprofit’s Board of Directors and will serve on the Finance and Audit Committee. Masterson, a Santa Barbara resident, has extensive experience as a CPA, working in the financial services industry and with nonprofit organizations. His background includes a Partnership in public accounting for seventeen years, as well as ten years in industry as a Chief Financial Officer, a Chief Operating Officer and a Chief Credit Officer. He is the founder and CEO of SM+Co LLC. Previously, he served as the Chief Credit Officer at Charles Schwab & Co., Inc., the Chief Financial Officer and Chief Accounting Officer for Provident New York Bancorp, and the Chief Financial Officer and Chief Operating Officer at Pacific Capital Bancorp.

“I am honored to be selected as a Board Member for ShelterBox USA,” said Masterson. “It is rewarding to be part of an organization focused on global humanitarian relief efforts for those affected by the chaos of disaster and conflict.”

Since 2000, ShelterBox has provided shelter, warmth, and dignity following more than 300 disasters in over 100 countries. ShelterBox responds urgently to earthquake, volcano, flood, hurricane, cyclone, tsunami, or conflict by delivering boxes of essential shelter, aid and other lifesaving supplies. Each iconic green ShelterBox contains a disaster relief tent for an extended family, blankets, a water filtration system, emergency lighting, and other tools for survival. The organization was nominated for the 2018 and 2019 Nobel Peace Prize. ShelterBox USA is based in Santa Barbara, California.

ShelterBox is an official Project Partner of Rotary International. Tax deductible donations to the organization can be made at http://www.ShelterBoxUSA.org or by calling (805) 608-2400.