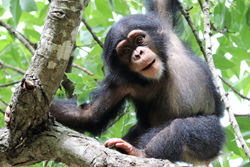 Tita was rescued from the pet trade and is learning how to be wild at PASA member sanctuary Chimpanzee Conservation Center in Guinea.

The data are clear that African apes and monkeys are under siege.

The Pan African Sanctuary Alliance (PASA)—the largest alliance of wildlife centers in Africa—released its 2020 census of African primates today. The report sheds new light on the state of the continent’s primates by combining census data collected by PASA member sanctuaries with information on the threats to wild primates and projections of human population growth in Africa. Taken together, the data provide a striking view of the complex challenges facing Africa’s great apes and monkeys.

“The data are clear that African apes and monkeys are under siege,” said Gregg Tully, Executive Director of PASA. “We run the very real prospect of losing some species in our lifetime, so we at PASA are using this report to start a broader dialog – one that considers the full context around primate conservation.”

The report is the role of human population growth in the fight to save great apes and monkeys from extinction. Human population in Africa is projected to grow from the current 1.3 billion to 2.5 billion in 2050. One fifth of the population is currently considered “very food insecure” and an additional 144 million people are classified as “moderately food insecure.” Forests and other wild habitat are already disappearing due to mining, forestry, and agricultural activity, and population growth will accelerate that loss, creating conflict with wildlife and escalating the risk of disease outbreaks.

“PASA members already face these realities,” continued Tully. “Wildlife crime, disease, habitat loss, and grinding poverty are the backdrop of their work. So they have built the relationships and resiliency needed to make lasting change.”

The report notes that PASA member sanctuaries employed nearly 700 African nationals and contributed over $6M to local economies – this in a year when the COVID-19 pandemic decimated their revenues.

While so far no primates in Africa are known to have contracted the disease, all sanctuaries in the Alliance implemented strict biosecurity protocols and many had staff sheltering on site for months, rather than risk bringing in the disease.
Despite the challenges, the need for sanctuary care has not diminished. PASA members rescued 239 primates – a 22% increase over 2019 – from poaching, the pet trade, and exploitative entertainment environments.

“Sanctuaries are crucial for long-term primate survival,” Tully said. “They can be a safe haven, a source of lifelong care, or a stop on a journey that leads back to the wild. But given what we see in this report, I worry that our efforts may not be sufficient. This urgency fuels our work – and these data are one tool to change the trajectory for these amazing animals.”