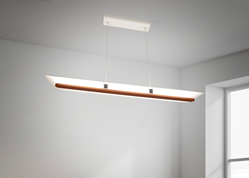 “The real wow factor of this light is the way the acrylic diffuser is illuminated. Without up-close inspection, it seems as though the thin upper diffuser is the illumination source” says product engineer Alex Murry.

Volare stands out from other linear suspension lighting seen on the commercial pendant lighting market because of its beautiful glow, interesting curved shape, and its impressive light output. Most linear pendant lighting provides only downlight which can create a cave-like atmosphere and harsh shadows. The improved performance of Volare provides usable surface downlight as well as uplight providing ambient illumination to the entire application space.

This pendant’s sleek design is credited to the pared-down simplicity of elements used such as the cloth-covered powered suspension cables eliminating a bulky power cord seen in similar fixtures. The LED light bar is suspended under the acrylic with hidden stand-offs and appears to float underneath the illuminated diffuser.

“The real wow factor of this light is the way the acrylic diffuser is illuminated. Without up-close inspection, it seems as though the thin upper diffuser is the illumination source” says product engineer Alex Murry. “The final design turned out to be somewhat of a trompe l'oeil, tricking the viewer as to how so much light could be emitted from seemingly nowhere. It’s one of my favorite fixtures I’ve ever been a part of producing.”

Volare is available in 4’, 5’, and 7’ nominal lengths making it a piece applicable for large or small spaces. This linear suspension light is evenly lit with fully-dimmable LEDs and optional 90+ CRI for accurate color representation. These LED sources are available in L30K, L35K and L40K LED color temperatures allowing this linear pendant to fit into a variety of commercial applications.

Volare’s multiple lengths, LED output options, and nearly symmetrical uplight/downlight photometric spread makes Volare a great light fixture for educational spaces, offices, meeting rooms, foyers, and lobby areas. This pendant light is easy to install with options for a flat canopy with a remote LED driver or with an LED driver integrated within the canopy. The LED light bar is available in over 20 powder coat paint finish options letting you get creative with how it fits into your space.