A 10-year Research Project by Magical Egypt Documents the Discovery of a “New Rosetta Stone” and a Hidden Scientific Message in the Art and Architecture of Ancient Egypt. 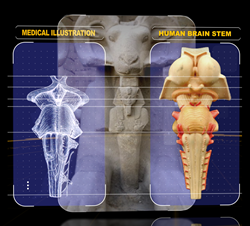 A significant discovery might forever change our picture of the distant past, and our estimation of how intelligent our ancient ancestors were. A 10-year ancient art research project has revealed the presence of a “new Rosetta stone”, a hidden visual cipher that has been ingeniously encrypted into ancient Egyptian art and architecture. The biggest surprise? The encrypted message paints a radically new picture of the degree of scientific sophistication in place in the ancient world. The findings are presented in the newly completed documentary series Magical Egypt 2

The discovery reveals an artistic technique that turns art, statuary, and architecture into living models and schematics of human biology. The artistic technique is seen throughout the culture in decorative motifs, symbolic statuary, bas reliefs, and in the architectural features of the temples. The technique uses a combination of symbolic icons and visual flourishes that conceal medically accurate illustrations and models within their compositions.

But it is not a simple biology lesson. The art seems to focus on the systems of human biology that are involved in the subjective experience of consciousness, still a notorious blind spot for modern science. The schematics mirror the latest discoveries from Harvard cognitive researchers pinpointing the physical centers involved in human consciousness. “This is certain to be a contentious point because it directly challenges a widely held belief in Egyptology that the ancient Egyptians did not understand the importance of the brain. The accurate modeling of the brain stem, diencephalon, ventricles, cerebrospinal and other subsystems, often with explicit descriptions of the functions of each system, make it clear that the ancients had an accurate and sophisticated understanding of the mysteries of the brain and its role in consciousness.” say project researchers Brad Klausen, Gary Osborn and Chance Gardner. “They seem to have synergized art and science in an ingenious way that indicates both the form and function of key components of the brain.”

The radical implications that this raises do not apply solely to Ancient Egypt. Once the team identified the visual technique of embedding these biological schematics into sacred art and architecture, the same techniques were noticed in the art of many other ancient cultures including Mesopotamia and Sumeria, which are generally thought to stretch back even further in time than Ancient Egypt. The technique was then noticed in use in Hindu, ancient Buddhist and even Mayan sacred art and statuary - in all cases, unifying a god or divine principle with the physical form of the brain or brain stem. The final bombshell dropped when the team identified the same correspondence technique to be present in the oldest known example of human artwork - the Venus of Willendorf, estimated to be over 30K years old. This jaw-dropping series of discoveries may demand a rewriting of both the history of civilization and the history of art. It calls for a new look at the original purpose of art and aesthetics.

The discovery shows that the mysteries of human consciousness were of extreme interest to the ancient mind. It also raises a much bigger question. How did the ancient world have such a sophisticated understanding of the role that the brain, nervous system, and ventricles played in consciousness? Where did this information come from, and how could such a remarkable thing have been lost to history?

The evolution of the research project and the groundbreaking series of discoveries are documented in the 6-part series “Magical Egypt, Series 2”.