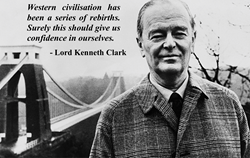 We’ve secured the important cooperation of the BBC and this film includes significant segments from Clark’s original 'Civilisation' footage.

Connecticut-based independent filmmakers Michael Maglaras and Terri Templeton of 217 Films announce the release of their new film project, “Civilisation and America” – their eighth in 15 years and their seventh “essay in film” – highlighting the impact that Lord Kenneth Clark’s epic thirteen-part television series "Civilisation" had on America and Americans in 1970 when it premiered on public television and as we struggled with our national conscience during the Vietnam War.

“Civilisation and America” is now available to rent or purchase on Vimeo via digital streaming.

To view a trailer, or to rent or purchase securely via streaming, click here.

“We’re happy to announce that renowned British author and Clark biographer James Stourton appears in our film,” said Michael Maglaras, the film’s writer and director. “We’ve also secured the important cooperation of the BBC, and as a result this film includes significant segments from Clark’s original "Civilisation" footage.”

To view a Director’s Statement by Michael Maglaras, follow this link.

The film was shot in the U.S. and London.

“I’m delighted to be participating in this new film about Kenneth Clark’s 'Civilisation,'” said James Stourton, author of "Kenneth Clark: Life, Art and Civilisation"...the definitive biography of Lord Clark. “Michael has chosen to make a film on America’s experience with this incredible documentary series. The impact that 'Civilisation' had on American cultural life when it was first premiered on television in the United States in 1970 was profound and provided Americans with a perspective on our rich shared Western cultural tradition – an impact and a message still meaningful today about the value of our collective cultural DNA.”

"Civilisation," produced by the BBC, had its first United States screening at the National Gallery of Art in Washington, D.C. in the fall of 1969, thanks to the vision of its then director J. Carter Brown, and was quickly taken up as one of the first important television programs of what was then the new Public Broadcasting Service. Fifty years later, and with an America facing new political and social challenges, Lord Kenneth Clark’s thirteen hours of "Civilisation" reminds us not only of the permanence of art and the permanent value of the human spirit in its creation, but also of the value of institutions and Clark’s belief that society “must be made to work.” Also featuring interviews with Professor Michael Murray, whose life was greatly affected by viewing "Civilisation" at the age of 21 and by the series’ brilliant writing, camera work, and innovative use of music. Using archival footage of an America struggling with itself during the height of the Vietnam War and with commentary by Sir David Attenborough...“Civilisation and America” will remind us yet again of the value of the arts in American society and in the lives of American citizens.