Xulon Press shares the heart of a B-29 Aircraft Commander. 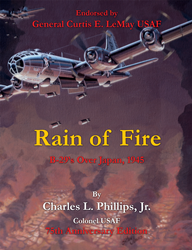 We're honoring and preserving the history revealed in our father’s book Rain of Fire B -29's Over Japan, 1945....for future generations

Colonel Phillips based his account on over 100 letters he sent home during his Pacific tour. Now his children present this special, 75th Anniversary Edition of their father’s account of his service in World War II. This edition was endorsed by General Curtis E. LeMay, USAF, and reminds readers that freedom is never free.

“We're honoring and preserving the history revealed in our father’s book Rain of Fire B -29's Over Japan, 1945....for future generations,” said Phillips and Stafford.

Colonel Charles L. Phillips, Jr., USAF was a 26-year-old Captain in the U.S. Army Air Corps, piloting B-29's during the final stages of WWII in the Pacific Theatre. He received a Distinguished Flying Cross for piloting the largest planes used in during WWII. One of his last missions was August 6th, 1945 - the day of Hiroshima - the same day he was forced to ditch his aircraft into the sea. Hear author PODCAST. listennotes.com B-29 Bomber Pilot Episode 217

Xulon Press, a division of Salem Media Group, is the world’s largest Christian self-publisher, with more than 15,000 titles published to date. Rain of Fire is available online through xulonpress.com/bookstore, amazon.com, and barnesandnoble.com.