Grillers Are Fired Up for the Big Game 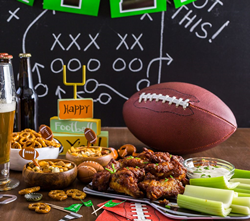 “Grilling is personal and has evolved to a year-round lifestyle choice with everyone from first-time grill owners to popular pitmasters, and even notable football players choosing to ‘wintercue’ for the Big Game,” said Emily McGee, Director – Communications, HPBA.

Grill owners don’t put away their grills when the snow falls. According to Hearth, Patio & Barbecue Association’s recent Barbecue Consumer Survey, when the NFL’s best take the field in February, 23 percent of grill owners cook their football feast in their backyards and on their decks – the highest percentage of any winter occasion.

In anticipation of winter’s biggest grilling day and as part of their ongoing multimedia campaign, #WhyIGrill, HPBA reached out to its followers and friends over social media to determine their game day grilling plans and more than 250 responded. An impressive 70% stated that they plan to grill when the Patriots and Rams take the field. While flavor (85%) and personal satisfaction (80%) topped the list of reasons to grill, the responses indicated that those surveyed love to grill and that there are many reasons to barbecue.

Of those who plan to grill, more than 93 percent will be dishing up a meaty flavor like hot dogs, burgers and brats, and 26 percent will sizzle up snacks including nachos and chili.

In addition, the survey found:

“Grilling is personal and has evolved to a year-round lifestyle choice with everyone from first-time grill owners to popular pitmasters, and even notable football players choosing to ‘wintercue’ for the Big Game,” said Emily McGee, Director – Communications, HPBA. “We at HPBA are inspired and motivated by this widespread grilling enthusiasm.”

To further capture this grilling enthusiasm, HPBA recently launched the #WhyIGrill campaign to get at the crux of why everyone fires up their grill. The #WhyIGrill” campaign turns to all current and prospective grillers encouraging they share online, in media, and via social their love for barbecuing, all unified by the #WhyIGrill hashtag.

When consumers were asked, ‘Why do you grill for the Big Game,’ responses included:

Ready to get your grill game on? Check out these recipes for inspiration: Yakitori Chicken Kebabs, Garlic Cilantro Lemongrass Wings, and Chicken Finger Poutine. And share your grilling creations on social media with #WhyIGrill.