The new HEAVY VTOL UAV 150H was developed on the basis of commercial “combat-proven” helicopter CH-7 and proprietary military-grade autopilot AP.X. The new UAV based on Manned-to-Unmanned technology has extended flight time and payload capacity – up to 8 hours and up to 150 kg of payload. 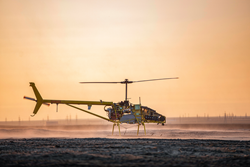 FRESHVALE LTD released the brand-new HEAVY VTOL UAV 150H with the results of its pioneering mission in the far North. Unmanned helicopter HEAVY VTOL UAV 150H successfully performed the tests by delivering 150 kg cargo to 130 km demonstrating safe autonomous flight and economical fuel consumption (22-25 l/h). The mission was completed by the crew of 2 persons only – operator and technician. Also Freshvale Ltd has announced successful completion of a new test: verification of performance was carried out in the harsh environmental conditions of mountainous areas.

HEAVY VTOL UAV 150H is developed for continuous autonomous flights with maximum endurance of up to 8 hours being able to cover 800+ km in diverse weather conditions (-20oC to up to 50oC). Unmanned complex is suitable for transportation with standard trailer or 20ft container.

This UAV can be equipped with the wide range of mission-specific payloads and is suitable for the following missions:

As for autopilot, the main feature of the AP.X automatic control system is a distributed architecture, when each component of the system has its own microcontroller providing data processing and communication with other components within the CAN network (Controller Area Network). The AP.X configuration allows to avoid loading the central processor with routine tasks by distributing management tasks to all system components. Flexible architecture of the AP.X allows to quickly connect various modules and systems that extend the functions of the unmanned platform, synchronize work with other robotic complexes -for example, it is possible for one operator to simultaneously control several different unmanned vehicles.

Being based on commercial “combat-proven” CH-7 helicopter, HEAVY VTOL UAV 150H provides its users with the most affordable OpEx and CapEx in such form-factor, reliable performance, simple and easily-accessible maintenance/ repair.

The Manned-to-Unmanned technology has significantly reduced the cost of the UAV, while retaining a payload capacity of 150 kg and a flight time of up to 8 hours.

By the projections of Goldman Sachs, the global UAV market will reach $ 100 billion in 2020, where military drones will account for 70% of the segment. According to analysts of Barclays Bank, the commercial drone market has already reached $ 4 billion and will grow 10 times over the next five years. 1.5 million is accounted for by UAVs in the oil and gas sector.

Unlike many other technologies, drones are being introduced faster than previously expected, for both commercial and military applications. They are used in a wide variety of areas and even more extensively than was assumed several years ago. Now manufacturers are forced to adapt to an ever-growing list of possible uses for drones.

Due to the continuous increase in market volumes and the expansion of the scope of UAV applications, the question of obtaining a reliable and at the same time economically profitable UAV that can cope with both government and commercial missions becomes inevitable. This task was successfully achieved using Manned-to-Unmanned technology, which has proved its effectiveness in various conditions.

New HEAVY VTOL UAV 150H using the Manned-to-Unmanned technology. This platform for military, law enforcement, intelligence, and emergency end users will change the concepts of operations of artillery, air defense, intelligence, special operations. Additionally, it has multiple use cases related to the delivery of cargo (both industrial and commercial users): offshore oil and gas, hard to reach locations, regular deliveries in rural areas – these are the fields for technological breakouts with new UAV.

The main advantages of Manned-to-Unmanned converted unmanned aerial vehicles are the lower cost of their purchase and operation, the safety of the pilot and crew, as well as the elimination of the "human factor". Indeed, according to the International Civil Aviation Organization (ICAO), at least 80% of all aviation incidents and accidents occur due to erroneous actions and failures in human performance both in the air and on the ground.

About the company:
FRESHVALE LЕD, being a reputable and internationally recognized company with more than ten years of global experience, offers a wide selection of public and infrastructure security products ranging from equipment to service- orientated solutions.


Our products are constantly serving tens of countries worldwide, providing essential support to state security, law enforcement and intelligence institutions across the globe.