Author and military historian Nathan Smithtro has released his debut book “The Forgone War: The Story of the Brave Keystone Grenadiers” 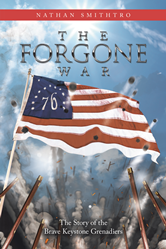 Friendship is the only weapon that we have to use, not to fight, but to love and cherish our loved ones. And even in the darkest of times, you can always find that tiny sliver of light that can make your dreams come true.

At the age of 22, author, military historian and war reenactor Nathan Smithtro has already published his first historical fiction novel. Set during the War of 1812, Smithtro was inspired to write “The Forgone War: The Story of the Brave Keystone Grenadiers” to remind America about the major impact winning the war had in helping the country mature into what it is today, the greatest nation on the planet.

“The Forgone War” follows the courageous journey of a young apple farmer named Simon Smithtrovich, who on the same day that America declares war on England and Canada, decides to recruit his four best friends and create the Seventy-Sixth Pennsylvania, an elite crack company of grenadiers intent on stopping at nothing to ensure America retains its freedom. About two years later, Major Smithtrovich and his friends Celestia and Daisy Rose, Timmy Miller and Brittany Benson, bravely march forward into the Battle of Chippewa, their first major fight of the war but have no idea they are about to be tested in ways they never imagined. As their friendships are challenged both physically and mentally in some of the war’s most terrible battles such as Lundy’s Lane, the men and women of the Seventy-Sixth Pennsylvania transform into an extraordinary group of soldiers who are determined to uphold the same principles their families fought for in the Revolutionary War.

“Friendship is the only weapon that we have to use, not to fight, but to love and cherish our loved ones. And even in the darkest of times, you can always find that tiny sliver of light that can make your dreams come true.” – Author, Nathan Smithtro, January 2, 2021

A story about honor, valor, bravery, and friendship, “The Forgone War” is an action-packed adventure full of heart that readers will not be able to put down until the very end and will create a lasting reminder of the importance of the War of 1812 in America’s history.

About the Author
Nathan Smithtro was born on June 18, 1998 which is the same day that the War of 1812 began and the same day as the Battle of Waterloo. Smithtro is an independent military historian who studies eighteenth and nineteenth-century warfare and tactics. He has loved military history ever since he was in the fourth grade and excelled greatly in history focused on military warfare in high school. Smithtro has taken part in historical reenacting for the past five years and has been part of American Civil War reenacting with the Second US Sharpshooters, as well as World War II reenacting as a private in the Ninety-Ninth Infantry Division of the 393rd Regiment. He is now a member of the American Revolutionary War reenactment group, His Majesty’s Forty-Third Regiment of Foot and the Second Pennsylvania Regiment. Smithtro currently resides in Brockway, Pennsylvania and has plans to become more involved in the entertainment industry and to publish more books about America’s famous wars and battles.