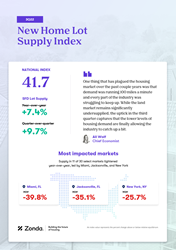 While the land market remains significantly undersupplied, the uptick in the third quarter captures that the lower levels of housing demand are finally allowing the industry to catch up a bit. —Ali Wolf, chief economist

Today, the experts at Zonda, the housing industry’s foremost advisors, released the New Home Lot Supply Index (LSI) for 3Q22. The New Home LSI, backed by data from Zonda, shows lot supply loosened year-over-year across the United States. The index is a residential real estate indicator based on the number of single-family vacant developed lots and the rate at which those lots are absorbed.

“One thing that has plagued the housing market over the past couple years was that demand was running 100 miles a minute and every part of the industry was struggling to keep up,” said Ali Wolf, chief economist at Zonda. “While the land market remains significantly undersupplied, the uptick in the third quarter captures that the lower levels of housing demand are finally allowing the industry to catch up a bit.”

Lot supply loosened in most major metropolitan areas in 3Q22, with 19 of 30 increasing year-over-year.

Zonda also records future lots through the stages of development. The stages range from raw land through streets in, which is the last step before the lot becomes a vacant developed lot. Zonda groups the last few stages into a classification called total upcoming lots, which indicates delivery within the next 12 months.

“It is encouraging to see growth in vacant developed lots and total upcoming lots after hitting historic lows earlier this year,” Wolf said. “The key thing we are tracking from here is the path over the next few quarters following the slower housing market and resulting reduction in overall housing starts.”

The Zonda New Home Lot Supply Index (LSI) is built on proprietary, industry-leading data that covers the production new home market across the United States. The index values represent single-family vacant developed lot supply, lots that are ready to be built on, relative to equilibrium. Released quarterly, the New Home LSI provides an unrivaled look into the lot markets across the country, offering a current quarter snapshot as well as insight into the directional trend.

The New Home LSI is calculated based on each markets’ specific equilibrium as determined by our team of local experts and historical activity. The comparative current value is adjusted to capture the “true” months of supply figure by applying a greater weight to vacant developed lots in subdivisions with more starts activity. Each index value is associated with a phrase highlighting the current lot supply dynamics. A value of 100, represents perfect equilibrium, while a value of 125 and above equals “Significantly Oversupplied”, 115-125 - “Slightly Oversupplied”, 85-115 - “Appropriately Supply”, 75-85 – “Slightly Undersupplied”, and 75 and below – “Significantly Undersupplied.”
The foundation of the index is a quarterly release conducted by Zonda. It is necessary to monitor residential lot supply to understand how new home markets may be impacted by the incoming pipeline.