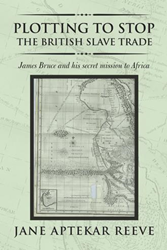 Her indignation concerning slavery and racism, meshed with an admiration for James Bruce and a newfound respect for the land of Ethiopia, led author Jane Aptekar Reeve to pen “Plotting to stop the British slave trade” (published by AuthorHouse UK). This book is an innovative biography about an adventurous, game-changing traveler in Africa during the West’s “Enlightenment” period (when the American and French Revolutions occurred).

James Bruce was not what he seemed to be. The author confirms this through a historical and factual account revealing that Bruce was actually an espionage agent working with a clique of powerful, mostly British, persons whose secret agenda was: to eradicate slaving.

“In his own day, Bruce’s book was laughed at and lampooned because many readers thought it silly to write, or read, a serious book about Africa — especially a book expressing respect for African people, history and culture,” Reeve states. “[His] actual life and work [though] differ from the accounts in previous writings about him, as I have slowly discovered.”

“Plotting to stop the British slave trade” brings to light Bruce’s subversive mission to investigate slave trafficking across the Mediterranean and Red Sea as well as the Atlantic in order to support his friends’ drive to destroy the principal source of their own country’s wealth. This was achieved in 1807. Like Bruce himself, the author addresses neglected aspects of the ancient habit of slavery and the related abuse of — particularly — women. Furthermore, she also tackles several other subjects concerning history, culture, religion, politics and war.

Reeve believes that modern readers will be glad following her detection of the truth about James Bruce, the science-minded traveler who was ahead of his time in every way. She also hopes for them to be encouraged by the success of humans’ ongoing drive, to this point in time, to make life more livable for everyone. Visit https://www.amazon.com/Plotting-Stop-British-Slave-Trade/dp/1728396247 to purchase a copy.

About the Author
Jane Aptekar Reeve was born in Ayrshire in Scotland in 1935. Her father was an officer in the Royal Electrical and Mechanical Engineers. She grew up partly in India but, from the age of 10, was mostly raised by her grandparents in Scotland and in a boarding school in England. She liked to read and also was lucky. She was awarded a scholarship (an “Exhibition”) to St. Hilda’s College in Oxford, where she studied English literature and language. She went on to gain a Fulbright scholarship at Indiana University to study American literature. There, she met her husband Bernard Aptekar, a New York artist. After her career as a teacher, Reeve became an editor with the United Nations until she took early retirement. Then, she settled in Oxford and used their libraries to write her book.

AuthorHouse, an Author Solutions, Inc. self-publishing imprint, is a leading provider of book publishing, marketing, and bookselling services for authors around the globe and offers the industry’s only suite of Hollywood book-to-film services. Committed to providing the highest level of customer service, AuthorHouse assigns each author personal publishing and marketing consultants who provide guidance throughout the process. Headquartered in Bloomington, Indiana, AuthorHouse celebrates over 23 years of service to authors. For more information or to publish a book visit authorhouse.co.uk or call 0800 047 8203.