Study Commissioned by Are You Dense, Inc. & Are You Dense Advocacy, Inc. Confirms Women Want Information about Breast Density 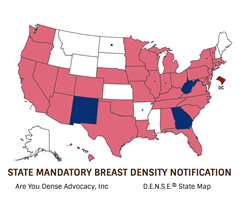 The results from this national survey suggest that density reporting laws are associated with improved awareness of breast density & is associated with greater engagement between women and their providers for more personalized, risk -based screening efforts. Co-author Christoph Lee, MD.

The Journal of the American College of Radiology (JACR) and the nonprofits, Are You Dense, Inc. and Are You Dense Advocacy, Inc. today announced study results showing that dense breast reporting laws in the United States significantly increase breast density awareness as well as prompt conversations between women and their healthcare providers about supplemental screening. Furthermore, the study shows that nearly 90 percent of women surveyed, regardless of the state’s law status, completely or mostly agree that they would prefer to know their breast tissue type than not know.

“Women and their physicians should talk about the woman’s breast density and its impact on breast cancer screening and diagnosis. At the American College of Radiology’s urging, inclusion of breast density information in mammography reports to physicians began long ago based on the ACR’s BI-RADS classification system. In states without legislation, women may not automatically receive density information but should be aware that it is generally available in the mammography report. This information is helpful for both radiologists and referring providers as they discuss density status with their patients,” said Dana Smetherman, MD, FACR, and chair of the American College of Radiology (ACR) Breast Imaging Commission.

Study results also show that women from states where density reporting laws have been in place longer are more likely to know their own density type and to report that their provider talked to them about supplemental screening.

“These study results confirm that women who participate in mammography screening want this important breast health information, and that the mammogram results letter leads to further conversations between them and their physicians about breast screening,” states lead study author Nancy M. Cappello, Ph.D, founder of Are You Dense, Inc. and Are You Dense Advocacy, Inc. and the inspiration behind the first density reporting law in the United States, which has led to 36 state laws. “This is particularly important as it shows that these laws, despite how they’re written, promote informed patient-provider shared decision making.”

Study co-author Christoph Lee, MD, MS, Professor of Radiology and Health Services at the University of Washington School of Medicine states, “The results from this national survey suggest that density reporting laws are associated with improved awareness of breast density and is associated with greater engagement between women and their providers. This type of engagement is important for more personalized, risk-based screening efforts.”

Are You Dense, Inc. and Are You Dense Advocacy, Inc. commissioned this survey of U.S. women to determine their knowledge about dense breast tissue and its masking of and risk factor for breast cancer, their preferences on learning about their dense breast tissue status after having a mammogram and as a result of notification, whether or not they had subsequent conversations with providers about supplemental screening.

The survey, conducted in February 2018, included 1,500 women in all 50 states, between 40 and 74 years old, who had a mammogram within the past two years. Survey results were compared across five groups based on law details and between women residing in states with laws versus without laws. While the majority of women in each of the sample groups were white, there was representation of minority women in each of the groups.

Dr. Cappello launched the legislative action of her organizations after being diagnosed with advanced-stage breast cancer in 2004 despite decades of normal mammography results. None of Dr. Cappello’s physicians told her that she had dense breast tissue, which had hidden the growing cancer in her breast, and none advised her to get adjunct screening.

Learn more about breast density and its relationship to breast cancer risk and legislative efforts across the U.S. at areyoudense.org and areyoudenseadvocacy.org. You can also visit http://www.mammographysaveslives.org and download the ACR Breast Density Brochure.

About Are You Dense, Inc. and Are You Dense Advocacy, Inc.
Nancy Cappello, Ph.D. is director and founder of Are You Dense, Inc., a 501(c)(3) public charity and Are You Dense Advocacy, Inc., a 501(c)(4) public charity. Dr. Cappello is the architect of using legislative efforts to standardize the communication of breast density to patients through the patient's mammography reporting results, starting with her state of Connecticut in 2009. Alongside patients turned advocates, Dr. Cappello has visited with and testified before state legislatures, in addition to the MQSA committee of the FDA and led efforts for the introduction of a federal bill in both the House and Senate. She had shared her story at medical and patient-centered conferences across the country and the globe. She is the recipient of numerous awards, including being named a health hero by Parade Magazine and honored for her health advocacy by the Connecticut Women's Hall of Fame.

About the Journal of the American College of Radiology
The official journal of the American College of Radiology, JACR informs its readers of timely, pertinent, and important topics affecting the practice of diagnostic radiologists, interventional radiologists, medical physicists, and radiation oncologists. In so doing, JACR improves their practices and helps optimize their role in the health care system. By providing a forum for informative, well-written articles on health policy, clinical practice, practice management, data science, and education, JACR engages readers in a dialogue that ultimately benefits patient care.