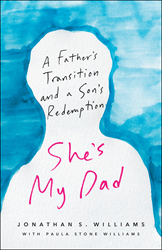 There’s no handbook. There’s no You-Tube video. Behind everyone’s coming-out party there is a family who is weeping, drinking too much, and googling what exactly it means to be transgender.

What is the right thing to do when a family member comes out as transgender? As Jonathan S. Williams (author of She’s My Dad: A Father’s Transition and a Son’s Redemption) discovered, “There’s no handbook. There’s no You-Tube video. Behind everyone’s coming-out party there is a family who is weeping, drinking too much, and googling what exactly it means to be transgender.”

Three months into pastoring his new evangelical church plant, Jonathan learned that his father Paul was transgender. A prominent evangelical pastor himself, Paul soon became Paula, and was immediately ousted from her community. Torn between supporting his father and his church’s position on transgender issues, Jonathan spiraled into depression and drinking. She’s My Dad follows Jonathan and Paula’s stories in alternating chapters, examining the feelings of loss, confusion, and anger when a parent transitions.

Jonathan and Paula explore their family’s continuing evolution, the meaning of remaining loyal to one’s father even when she is no longer a man, the ongoing theological evolution surrounding transgender rights and advocacy in the church, and the unflinching self-scrutiny of a pastor who lost his God only to find God again in his father’s transition.

Jonathan S. Williams is Senior Pastor of Forefront Church in New York, a progressive church that works to bring a just and generous Christianity to New York City.

Paula Stone Williams is a nationally known speaker on gender equity and LGBTQ advocacy. She is the Pastor of Preaching and Worship at Left Hand Church in Longmont, Colorado, and a therapist with RLT Pathways, Inc.

Praise for She’s My Dad: A Father’s Transition and a Son’s Redemption

“Written with gut-wrenching honesty and a raw vulnerability that exposes both deep pain and deep compassion, this gripping memoir reveals the heartache and the beauty of navigating life when a family member comes out. A much-welcomed addition of the library of LGBTQ+ resources and one I highly recommend!”
—Amber Cantorna, author of Refocusing My Family and Unashamed: A Coming-Out Guide for LGBTQ Christians

“When a parent begins living their gender identity authentically, it impacts the identity of everyone in the family. In She’s My Dad, Jonathan Williams describes the pain of reconceiving his father and himself, both as individuals and as pastors. The book is a wonderful resource for transitioning people and their loved ones.”
—Suzanne DeWitt Hall, author of Transfigured: A 40-Day Journey through Scripture for Gender-Queer and Transgender People

“Jonathan Williams manages to honestly capture the pain and heartbreak he felt during his parent’s transition without discounting the reality of Paula’s identity. I kept waiting for the moment when the suffering of these two people would be pitted against each other. Instead, Jonathan and Paula work together to show us a reality in which two people in difficult circumstances can journey through pain and toward a new relationship.”
—Austen Hartke, author of Transforming: The Bible and the Lives of Transgender Christians