The journey towards self-love and acceptance is being led by an artist whose voice helps light the way: IAMREBELWILL. For his new album, “Hot Blooded” is the first single, and a wonderful starting point on this walk towards finding love within oneself. 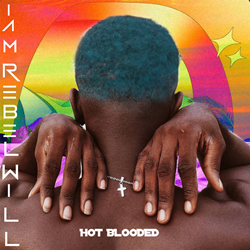 Reaching a climax between equality and music, “Hot Blooded” is an ode to IAMREBELWILL's personal journey towards acceptance, and having the courage to express yourself. This hot new single is an anthem for the free-spirited vagabond inside all of us.

During a troubled time of uncertainty, and the continuous battle for equality, IAMREBELWILL launches his first single from his new album RebelFuturism. Reaching a climax between equality and music, “Hot Blooded” is an ode to his personal journey towards acceptance, and having the courage to express yourself. This hot new single is an anthem for the free-spirited vagabond inside all of us.

IAMREBELWILL’s ultimate goal is to utilize his voice to challenge the stereotypical perspectives in pop music, and to empower marginalized groups such as the LGBTQIA+ and BIPOC community to be true to themselves, and be fearless in their pursuit of what makes them special.

IAMREBELWILL explains that “I spent a huge portion of my life afraid to be myself. With this upcoming project, RebelFuturism, I feel I allowed myself to be more authentic, to Rebel!"

Born and raised in bilingual Montreal, Toronto-based Pop artist IAMREBELWILL is influenced by the outstanding showmanship of the legendary Janet Jackson, the eclectic and eccentric artistry of Prince, and the sounds of Montreal-based producer, Kaytranada. IAMREBELWILL’s appreciation of these magnetic artists are deeply rooted in him and his work, specifically his hot new single “Hot Blooded”.

“Hot Blooded” is the introductory single of Rebel’s upcoming project, RebelFuturism, giving the listener a taste of what’s coming next, and it leaves them wanting more. “Hot Blooded” is seductive, contemporary R&B, soaked in the neon-bleached nightclub vibes of house bass-lines, infused with irresistible pop hooks and melodies.

“It’s a soundtrack for modernity, addressing sexuality, sexual fluidity, identity and equality,” says Rebel. “As a proud member of both the LGBTQIA and BIPOC community, I wanted to create something that gave a voice to my experience and a voice to folks whose stories, the majority of the time, are not told.”

IAMREBELWILL's credits speak for themselves: on previous singles he has worked with acclaimed producers including Jack Knight from BadBoy Entertainment on the hit single “Better” which debuted in 2018 in Los Angeles, California. “Til The Sun Comes Down” also debuted in 2018 and is IAMREBELWILL’s most-played single on Spotify, and was produced by LA producer Mantra whose credits include Future and Rihanna.

However, that’s not all. IAMREBELWILL is an Artist who loves to perform whether it’s on a stage or in the street. He has opened for a number of Pop and R&B powerhouses including Jacquees, Azealia Banks and Tinashe. IAMREBEWILL makes a solid effort to represent his communities and use his voice to inspire the youth of both marginalized communities: LGBTQIA+ and BIPOC.

IAMREBELWILL leaves us all wanting more of him, not only because of his showmanship and velvet-smooth sound, but by his steadfast, positive attitude that he features while partnering up with organizations such as It Gets Better Canada, an LGBTQIA+ youth charity. IAMREBELWILL was also showcased as a spokesperson for Pride Toronto 2020 which was featured on billboards across the city of Toronto.

Check out some highlights from the past year:

Please take a moment, listen to the song, and join IAMREBELWILL on this journey of self-love and acceptance.