New Novel Exposes the Threat Drug Cartels Have on Humankind

Author Paul H. Barrett explores the impact of a worldwide spread of cocaine through coffee in ‘The Coffee Cartel’ 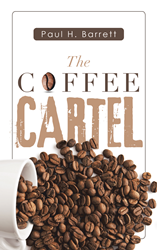 “With ‘The Coffee Cartel,’ I want to entertain the reader with a suspenseful tale that involves state-of-the-art surveillance and present a unique perspective on unsuspected cocaine addiction and theoretical world domination,” Barrett said.

Paul H. Barrett, a Navy veteran and experienced yacht captain, recently published an adventure novel, “The Coffee Cartel,” which follows Paul Pilot as he discovers and investigates the worldwide spread of modified, super-addictive cocaine laced coffee that hooks each innocent, unsuspecting coffee drinker. This fictional exposé sheds light on the horrors of drug addiction in our world.

Paul Pilot and his fisherman friend were out at sea roughly 20 miles away from Cuba on Pilot’s 55’ Hatteras when they encountered intruders on their boat. The intruders are killed and Pilot, a retired FBI agent, discovers that these intruders were part of a drug cartel that circulate cocaine through coffee. Ultimately, Pilot stops the Cartel with the help of former FBI Associates, leading-edge surveillance, intense interrogations and a little luck.

Readers follow Pilot select Special Forces and all the FBI support required to stop ruthless villains operating cartel operations around the globe. Along his journey, Pilot falls in love with an Afro-Cuban woman named Sara Sonata, who he met in Trinidad.

Barrett wrote this book to inform readers how unsuspected drug addiction could impact humankind on a global scale. By providing this extreme example of drug circulation, “The Coffee Cartel” exposes readers to the severe consequences of innocent drug consumption.

“With ‘The Coffee Cartel,’ I want to entertain the reader with a suspenseful tale that involves state-of-the-art surveillance and present a unique perspective on unsuspected cocaine addiction and theoretical world domination,” Barrett said.

About the author
Paul H. Barrett is a retired engineer, Navy veteran and musician. He has been a yacht captain for over 50 years and currently resides in Key West, Florida where he enjoys the ocean and listing to, reading and sharing mysteries of the land and sea. His book, “The Coffee Cartel,” illustrates his passion for the sea.