New Novel Features a Young Girl Who Opens Her Heart, Thanks to Some New Friends

Xulon Press presents an original story for readers 4th grade and up. 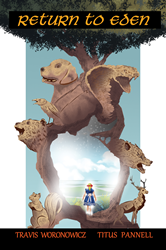 With the help of the animals, Aggie learns to open her heart to friendship, forgiveness, and the love of God

Woronowicz asked the Lord for guidance about a book. He received the image of a golden retriever in a red sash and a snake with a dirty crown. This imaginative mental image eventually became Xulon’s Christian Writer’s Contest Winner, Return to Eden.

“After the loss of her mother, Aggie stumbles upon an animal kingdom, where she meets new friends who join her side as she begins an adventure of discovering the truth about God. With the help of the animals, Aggie learns to open her heart to friendship, forgiveness, and the love of God,” said Woronowicz.

Illustrator Titus Pannell is an illustrator and animator who studied traditional animation at the Academy of University in San Francisco. He also has two other degrees in biology and theology and formerly served in the US Marine Corps.

Xulon Press, a division of Salem Media Group, is the world’s largest Christian self-publisher, with more than 15,000 titles published to date. Return to Eden is available online through xulonpress.com/bookstore, amazon.com, and barnesandnoble.com.