New Novel Shows How God is Good, Even When Everything Around Us Looks Bad 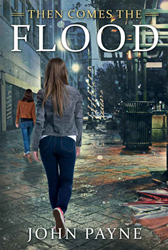 God achieves his will by all human beings acting freely

Payne’s story centers around Megan Alladee, who was sexually assaulted and aborted the resulting pregnancy. Burdened by guilt and loss, she crosses paths with Kayla, whose 7-month old baby was killed in a car crash. As Megan learns of the faith that sees Kayla through her pain, she is confronted with the ultimate question: How could a loving God allow all this suffering? Payne offers answers to this question through his characters, and without preaching.

“Through much study as a believer, I came to realize that the apparent contradiction between God's sovereignty, unfathomable to us, and human freedom that endeavors to work against his sovereignty, come together. God achieves his will by all human beings acting freely,” said Payne.

John Payne was educated at Mid South Bible College, Memphis, Tennessee and holds a Certificate of Christian Apologetics from BIOLA University. His career has included General Manager of Customer Relationship Management for corporations.

Xulon Press, a division of Salem Media Group, is the world’s largest Christian self-publisher, with more than 15,000 titles published to date. Then Comes the Flood is available online through xulonpress.com/bookstore, amazon.com, and barnesandnoble.com.