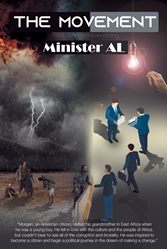 “’The Movement that Changed Everything’ highlights what happens when we care for one another as well as what we can achieve when we unite for the same cause. Together, we can fight until we are there.”

Author Minister Al has released “The Movement that Changed Everything,” an immersive and thought-provoking novel that follows Morgan, an ordinary young man with a deep passion for justice that takes him across the world and puts him on a path toward political leadership.

As an African American teenager coming of age in Texas during the 1960s, Morgan encounters many injustices. After organizing a student demonstration to end segregation in his district and joining student government as senior class president, he becomes more driven to enact change in the world around him. His dream is to one day be an elected representative and serve as a voice for those who have been silenced or disempowered.

However, Morgan’s goal of serving as a U.S. senator takes a different turn after he visits his East African grandmother in his family’s home county. There, he witnesses extreme corruption, brutality, injustice and human rights violations at the hands of the regime. Determined to make a difference, he uses his protective status as an American to lead a movement for change. While his first attempt is unsuccessful and he is forced to flee the country, he remains steadfast in his goal and eventually returns to fortify his movement and take political office.

Inspired by the differences he noticed between countries after emigrating from East Africa to Canada, Minister Al wrote “The Movement that Changed Everything” to bring awareness to the corruption and brutality that much of the world still lives under today. Through his book, he hopes to connect with readers who want to make a change and remind them of their innate, God-given power to make a difference.

“’The Movement that Changed Everything’ highlights what happens when we care for one another as well as what we can achieve when we unite for the same cause,” said Minister Al. “Together, we can fight until we are there.”

An action-packed novel about a man who risks pain and suffering to help advance the lives of others, “The Movement that Changed Everything” inspires readers to join within their communities for a more equitable future.

About the author
Minister Al was born and raised in Africa and grew up during the war. In his early 20s, he immigrated to Canada, where he worked a variety of hard labor jobs in manufacturing, truck driving, the oil fields, construction, logging and sales marketing. In 2020, he found a unique opportunity to become an author and has written five books and published two: “Warning” and “The Movement that Changed Everything.” To learn more about Minister Al, please visit ministeral.com or connect with him on Facebook.