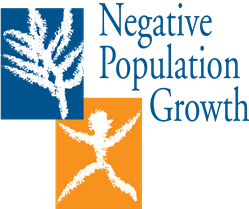 Think of the overpopulation issue like a four-legged iron stool squishing the Earth and its potential for supporting all life forms, not just us

Negative Population Growth has published a new Forum paper titled, What Gives Overpopulation Its Legs? Authored by Dr. Karen I. Shragg, the paper breaks down the reasons for overpopulation into four main categories which, when visualized as the four legs of a stool, hold up overpopulation (the seat of the stool). She begins her discourse, noting: “We need to name the main reasons why overpopulation is here and knocking at our door so loudly. If we can come to terms with how we got here, only then can we begin to untangle ourselves from its deadly grip. To keep it simplified while remaining truthful, think of the overpopulation issue like a four-legged iron stool squishing the Earth and its potential for supporting all life forms, not just us. All of the legs of the oppressive stool of overpopulation work together to create the mess, yet they do not all get the attention they need.” Shragg defines the four legs as Total Fertility Rate (TFR), Reduced Mortality/Increased Longevity, Fossil Fuel-Based Neo-Capitalism, and Immigration Policy.

Beginning with Total Fertility Rate, Shragg illustrates how quickly family numbers increase, noting: “If a couple has two children, and they in turn each have two children, then given good health and no catastrophes, by the third generation, there will be eight progeny. In the same scenario, with one extra child, the third generation would have 27 grandchildren, and so on.” After showing how quickly families can multiply in size over just a few generations, Shragg also lists other circumstances that affect TFR, such as economic opportunity, culture, infant mortality, and access to birth control.

Shragg describes the second leg, Reduced Mortality/Increased Longevity, as a reference to “how the modern world has been successful in curing diseases, decreasing infant mortality and increasing crop yields.” These successes come with consequences, as Shragg points out: “Success in increasing populations at some point challenges the ability of the environment to adequately support these increases.” We are living longer healthier lives, allowing more time than ever to build families.

The third leg, Fossil Fuel-Based Neo-Capitalism, is troubling in that the use of fossil fuels is heavily embedded in our economy and everyday lives. Shragg makes the connection, explaining: “Fossil fuel is the engine that drives our growth-based economy and our daily lives. It's not just in our own transportation, but in the way our food is grown and shipped to us. It is the way our homes and businesses are heated and cooled. Its production is causing our planet to warm and has put us in the precarious position of reaching no-return numbers in parts per million of carbon that are frightening.”

The fourth and final leg of overpopulation is Immigration Policy. Shragg believes there are many reasons people want to immigrate to the U.S., noting: “Today people seek career opportunities, still others are looking for more lenient lifestyle laws. Many want to go where they believe they can make a more economically secure life for themselves and their families and then the rest of their relatives often wish to follow.”

Shragg sees the havoc wreaked by overpopulation, saying: “It drives overdevelopment, air and water pollution, loss of species, traffic, and is the engine behind the density, crime, and grime of our cities, and sprawl of our suburbs.” The problem of overpopulation is a result of many influences, such as: emotional, cultural, biological, and political, which all play a role in the four legs of the overpopulation issue. Shragg ends her work with a call to action for people working on population issues to come together to find a clear path into the future, stating: “It would be best if all population groups – those who work strictly on immigration, those who work only on economics, those who work on family planning and TFR – joined hands to share their expertise and to strategize on how best to tame this beast together.”