New Paranormal Romance Delves into a World of Vampires and History 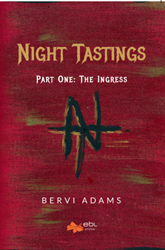 “Nikolai appears to have it all:” Adams said, “looks, wealth, privilege and, yet he was adrift. After a glance in the eyes of Tatianya and then the decision to follow the siren’s call, their lives are forever changed.”

A nurse by profession, but a creative writer by passion, author Bervi Adams introduces readers to the first book of her trilogy series, “Night Tastings Part 1: The Ingress,” a paranormal romance exploring a world of vampires, set in the 19th century.

In the book, readers meet Nikolai, a lower-level aristocrat in his early 30s, who sparks interest in the duke’s youngest daughter, Tatianya, after meandering the palace grounds. Although barely more than a child, she unknowingly manages to tame the wild and dashing Nikolai, leaving him captivated. However, complications arise when Nikolai is seduced into gambling by a vampire offering powers beyond his wildest dreams.

“Nikolai appears to have it all:” Adams said, “looks, wealth, privilege and, yet, he was adrift. After a glance in the eyes of Tatianya and then the decision to follow the siren’s call, their lives are forever changed.”

Nikolai’s decision risks Tatianya’s love and leads to an eventful gathering on the eve of Mardi Gras that shatters their world. Unable to return home, they venture into Napa Valley and find a way to come to terms with the path that life has challenged them to follow.

Rich in history and romance, readers may indulge in Adams' enchanting writings and be left wanting more as she brings to life the allure of 19th-century Russia. Adams is thrilled to share the first book of her trilogy, a journey that has been a long time coming to fruition after ten years in the making.

About the author
Bervi Adams has worn many hats in her life. Although a nurse by profession, writing has always been a passion of hers. After the encouragement of her partner, she summoned the courage to share her creative gift with the world by publishing her first book after ten years in the making. When not delving into the depths of her imagination, Bervi enjoys traveling, shelling, wine tasting, and spending time with friends and family. She is a mother of two grown children and resides in Tampa, Fla. To learn more, please visit https://www.berviadams.com/about-the-book/