Key New NEPC Policy Brief Takeaway: New brief examines the effects of racism through an economic perspective to document the burden of inequity in the U.S. K-12 education system. 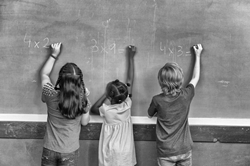 Even as the U.S. education system becomes more ethnically and racially diverse, racial disparities persist with regard to school segregation, educational resources, disciplinary treatment, and ultimately educational outcomes. These disparities harm students individually and have significant societal impacts as well, including economic consequences. Educational resources are misallocated, while Black and Hispanic students often leave school with substantially lower levels of human capital and, as a result, have lower lifetime earnings on average.

Together, these misallocations and losses in human capital are examined in a new NEPC policy brief, The Economic Burden of Racism from the U.S. Education System. The brief, authored by Clive Belfield of Queens College, City University of New York, explores this economic burden, asking what level of resources—not just direct money outlays but also time and effort that must be ultimately be paid for in some way—is lost because of racial discrimination.

Racism within the formal K-12 educational system is best understood as a carryover or symptom of societal racism. By focusing on schools, this brief should not distract from that reality. Just as importantly, focusing on just the economic price tag of racism should not distract from or minimize the human cost of racism—in terms of lost lives and other physical and psychological brutality, as well as economic inequities that may not impact the bottom-line numbers. All of these harms are part of the same systemic whole wrought by racism. And seriously addressing racism in schools and in the society housing those schools will lead to across-the-board benefits, however measured.

In approaching his analysis, Professor Belfield notes that some harms cannot be included because resources haven’t been identified and calculated. But he conservatively estimates that, for each cohort of students age 18, the burden from lower human/social capital is between $42 and $92 billion in lost lifetime economic outcomes. For schools and districts, costs of racial disparities are incurred each year from K through 12th grade. Approximately and conservatively, these additional costs annually amount to $0.4 billion on school discipline, $3.8 billion on special education, $3.2 billion grade repetition, and $0.1 billion on direct spending to combat racism.

These conservative estimates of the main economic burdens of racial disparities point to the need for more complete and precise data. Professor Belfield concludes with recommendations calling for further investigation to fully understand both the economic burden of racism in U.S. education and how racism in other domains of society affects racial inequalities within schools.

Find The Economic Burden of Racism from the U.S. Education System, by Clive Belfield, at:
http://nepc.colorado.edu/publication/cost-of-racism

This policy brief was made possible in part by the support of the Great Lakes Center for Education Research and Practice (greatlakescenter.org).