Former professional wrestler Jeff Bearden takes readers on a thrilling ride through his experiences wrestling professionally in front of thousands around the world in his new book, ‘The Man Behind the Makeup: The Professional Wrestling Life and Times of Jeff Bearden, Who Wrestled as Giant Warrior, Big Tiger Steele, Colossus the Gladiator, and Butch Masters.’ 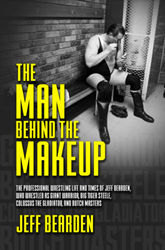 Jeff Bearden has recently released 'The Man Behind the Makeup: The Professional Wrestling Life and Times of Jeff Bearden, Who Wrestled as Giant Warrior, Big Tiger Steele, Colossus the Gladiator, and Butch Masters.' This memoir follows Bearden, international pro wrestling star, through times of challenge, terror, and triumph.

Under these guises of several pro wrestling personas, Jeff Bearden became part of wrestling history. Enter the wild, bloody life of pro wrestling during its Golden Age from the viewpoint of one of its biggest stars. At seven feet tall, Jeff Bearden towered over his competition from the time he premiered in territory wrestling in 1987, through the crazed and dangerous wrestling scenes, infamy, and championships in Mexico, Puerto Rico, South Africa, Europe, Japan, India, and the Middle East. Bearden’s no-holds-barred career spanned 30 years and four continents.

Bearden takes readers through the shocking, the tragic, and the hilarious stories of his adventures. Trained by classic Texan wrestling stars Dory Funk Jr. and Dick Murdoch, Bearden went on to encounter legends of wrestling history: Bruiser Brody, the Von Erichs, André the Giant, Owen Hart, Abdullah the Butcher, and the Undertaker. Bearden tells of his powerful friendship with WWE Hall-of-Famer, Yokozuna. From the time he was a skinny pro basketball player, to his days as a green babyface, to his reign as a notorious, 375-pound heel, Bearden’s life is one astonishing story after another.

Bearden’s unusual career and his freedom to choose venues anywhere and everywhere provides unique insight into the wrestling world. He takes readers around the globe to learn the secrets and truths of a life spent joyfully whipping crowds into a frenzy from inside the ring, as well as his personal life outside. In wrestling and in life, you’re only as good as the guy you beat – even if that guy is yourself.

Bearden says, “I spent almost 31 years entertaining people from all over the globe and enjoyed every minute of it. This book tells the experiences that I had with my worldly travels and some of the crazy experiences that I had with fans, including being stabbed by spectators multiple times in multiple places. This is my journey towards becoming a professional wrestler and reaching my childhood dreams.”

As a professional wrestler for over 30 years — working under the names Giant Warrior and Big Tiger Steele –Jeff Bearden entertained audiences all over the world, including audiences of over 75,000. Bearden wrestled André the Giant, Abdullah the Butcher, Yokozuna, Canek, Mil Mascaras, Lance von Erich, Dick Murdoch, Dory and Terry Funk, and many others. He is a co-founder of At Large PR and Clarens Publishing. Bearden is also a motivational speaker and certified happiness coach.

Some of his career highlights include:

Bearden’s book can be found on Amazon at this link.

And on Audible at this link.