Protectimus Ltd has begun offering Protectimus Flex - a new model of programmable hardware OATH token. The device comes in a key fob form factor and is equipped with a battery level indicator, distinguishing it from the company's existing programmable TOTP token, the popular Protectimus Slim NFC. 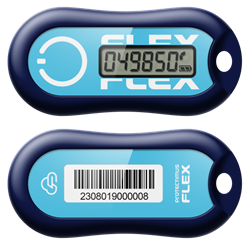 Sales of Protectimus Flex programmable, key fob-style TOTP tokens have already started. The tokens were developed specifically to replace Google Authenticator and other two-factor authentication apps for services without native support for hardware tokens: these include Office 365, Azure MFA, Google, PayPal, GitHub, Bitfinex, Coinbase, Facebook, Twitter, and many others.

Protectimus Flex reprogrammable TOTP tokens offer a time synchronization feature. Each time the token is programmed, the internal clock is set to the exact current time. This precludes the possibility of time drift between the authentication server and the TOTP token.

The token comes in a convenient key fob form factor. Users should always have their OTP tokens to hand, and they can easily carry the key fob on their key rings. This way, users won't forget their tokens at home or leave them at the office.